According to the National Police Agency (NPA), 32 of the detainees have been put under arrest for various digital sex crimes, including production and distribution of sexual exploitation materials, nonconsenting sharing of sex videos of women and secret filming of women in public places.

By crime type, police have detected three cases of production and distribution of sexual exploitation materials, including one involving the "Baksabang" chat room on the messaging service Telegram that allowed paid members to view illegally taken photos and videos of violent sex acts involving underage girls.

Baksabang founder Cho Ju-bin, a 25-year-old, and his three co-conspirators have been arrested for allegedly blackmailing women into providing their sexual videos to the Telegram chat room. 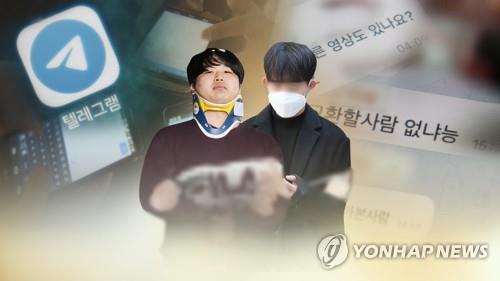 In as many as 144 cases, offenders were charged with photographing or filming their partners during sex without their consent and sharing those materials with acquaintances and others.

The remaining 117 cases involved other digital sex crimes, such as secret filming of women in public places and production and uploading of manipulated videos called deepfakes.

The NPA said 34 cases have been transferred to the prosecution and the other 240 cases are still under investigation.

The 221 detainees include 57 operators of online sexual sites, such as Cho, 64 distributors of sexual materials and 100 possessors of such materials, it noted.

Police said they are now tracking down suspected operators of other illegal sexual chat rooms on the Telegram messenger service, including the "Nth Room," while looking into the distribution of sexual exploitation materials on the Wickr instant messaging service.

Meanwhile, the Supreme Prosecutors Office said it has instructed prosecutors nationwide to seek much tougher punishments against digital sexual criminals. In particular, prosecutors have been ordered to demand a maximum penalty of life imprisonment for masterminds of sexual exploitation criminal rings in court trials.

The prosecution will also demand an imprisonment of longer than seven years for suspects accused of distributing sexual exploitation materials for profit.

Law enforcement authorities said while there are continuous demands to make public the identities of all alleged perpetrators of sex crimes, regardless of age, the identities of teenagers will be withheld in accordance with existing rules.

Teens are only being questioned in the presence of their parents or designated guardians. Of those that have been detained, 65 are known to be under 20 years of age, the second largest group after 103 suspects in their 20s.

The ruling Democratic Party declared war on digital sex crimes last month and submitted three revision bills for the Criminal Law, the Sexual Violence Crime Act, and the Information and Communication Network Act to the Assembly, calling for stricter punishment of blackmailing with videos of a sexual nature.