SEOUL, April 9 (Yonhap) -- South Korean stocks rose more than 1 percent on Thursday on hopes that coronavirus infections around the globe are nearing a peak. The Korean won rose against the U.S. dollar.

The main index tracked overnight gains on Wall Street. U.S. stocks soared amid the possibility that the coronavirus death toll and infections in the United States could peak this week, Huh Jae-hwan, a strategist at Eugene Investment Co., said. 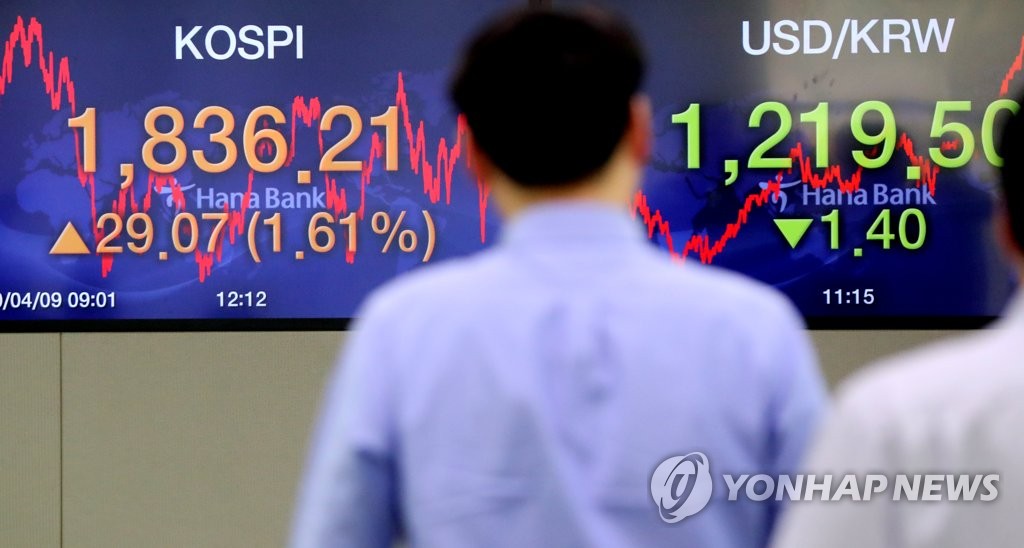 It remains unclear whether the United States and other oil producers, including Saudi Arabia and Russia, could reach a deal that could stabilize crude prices that plunged to their lowest level in decades.

Seo Sang-young, a researcher at Kiwoom Securities Co., said there is uncertainty in markets ahead of a crucial videoconference late Thursday on cutting oil output.

Individuals bought a net 301.5 billion won (US$247 million) worth of stocks, offsetting combined net sell-offs valued at 316.2 billion won by foreigners and institutions. Foreigners continued to offload local stocks for the 26th consecutive session on Thursday.

In Seoul, most large-cap stocks rose across the board.

Bond prices, which move inversely to yields, closed higher. The yield on three-year Treasurys fell 3.8 basis points to 0.986 percent, and the return on the benchmark five-year government bonds shed 6.2 basis points to 1.202 percent.