SEOUL, April 9 (Yonhap) -- South Korean officials and universities on Thursday began to discuss how to meet students' growing calls for refunds over disruptions in schools caused by the coronavirus outbreak.

Most universities delayed the start of the new semester by two weeks last month and are running online classes to prevent the spread of COVID-19. Students have filed petitions and held rallies, saying their right to learn has been violated and demanding schools refund their tuition.

On Tuesday, Vice Education Minister Park Baeg-beom and the new leadership of the Korean Council for University Education discussed the issue, among others, during their meeting to get acquainted, ministry officials said.

The council leaders told Park that universities could not afford refunds, citing financial difficulties stemming from a freeze of tuition over the past 10 years and recent spikes in spending to quarantine foreign students, prevent infection in schools and prepare for remote learning, according to the ministry.

Instead, universities are willing to consider providing special grants to support students suffering from the economic fallout of the virus crisis, the officials said.

They also suggested the government allow state subsidies for school improvement projects to be used for assisting students. 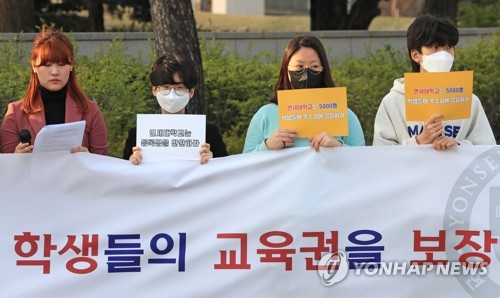