SEOUL, April 9 (Yonhap) -- A Seoul court on Thursday issued an arrest warrant for a co-conspirator in a high-profile sexual blackmail case that has ignited public fury over the exploitation of women and girls through online group chat rooms.

The Seoul Central District Court approved the police's request to arrest an 18-year-old man, identified only as Kang, for allegedly acting as an accessory to the operation of the "Baksabang" chat room on the messaging service Telegram. The chat room allowed paid members to view illegally taken photos and videos of violent sex acts involving girls.

Baksabang founder Cho Ju-bin, a 25-year-old, and his three co-conspirators, including Kang, have all been detained or arrested for allegedly blackmailing women into providing sexual videos.

The court said there is probable cause to detain Kang for violating the Act on the Protection of Children and Youth against Sex Offenses. It added that Kang needs to be detained because he is a flight risk and could try to destroy crucial evidence. 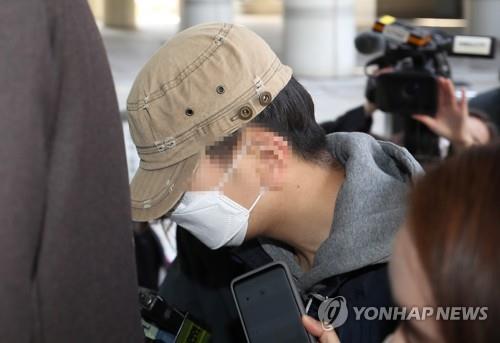 Kang is accused of having recruited and managed paid members of Baksabang, which means "doctor's room" in Korean, and delivering criminal proceeds from the chat room to Cho. Kang was a high school student last year when he allegedly worked for Cho.

Kang didn't respond to questions from reporters earlier Thursday when he showed up at the Seoul court to attend his arrest warrant hearing.

A military court Monday issued a warrant to arrest another Baksabang accomplice, identified only as an Army private first class, while prosecutors are planning to indict Cho on multiple sexual crime charges next week.

Expanding their investigations into other participants in the Baksabang chat room, police have so far booked 10 paid members for possessing child sexual exploitation materials.

Police have also obtained the nicknames of about 15,000 paid members of Baksabang from digital data secured from Cho and are now tracking down their personal identity information.