SEOUL, April 9 (Yonhap) -- Terrestrial broadcasters that have struggled with falling viewership have been tightening their belts again as the local advertisement market has been hit hard by the novel coronavirus pandemic.

Three broadcasters, KBS, MBC and SBS, seemed to bask in the increased TV viewing as people are asked to stay at home due to intensifying fears over COVID-19.

But the protracted coronavirus disruptions dealt a blow to businesses and to TV stations that depend largely on advertisements.

KBS, a state-run broadcaster, announced plans to adopt an austerity policy to downsize its spending by nearly 190 billion won (US$15.6 million).

Its advertisement sales decreased by 8.4 billion won over the first two months of the year, accounting for 78 percent of its target. Monthly sales slid by 8 billion won in March alone.

"If this downside trend continues until the end of the year, we may post 52.2 billion won in net deficit and 126.9 billion won in operating loss," Yang Seung-dong, president of KBS, said earlier this month. "We need to come up with measures to manage the organization in a more effective way."

MBC already implemented cost-saving policies this month as its first-quarter advertisement revenues tumbled by 9.3 billion won from a year ago.

The TV station has cut allowances and bonuses given to its employees for work processes and production by 30 percent or more.

SBS said its earnings from advertisements dove by 10 billion won in the first quarter from a year ago and that it had a grim forecast for its April bottom line.

"Apart from the advertisement sector, we are facing difficulties in many areas, including sponsorship, production and overseas filming," Park Jung-hoon, president of SBS, said. "We will reduce unnecessary expenses to save 15 billion won."

The three TV stations have kept making efforts to cut down on expenses and reduce payrolls since last year due to intensifying competition with cable channels and other platforms. They have scrapped costly weekday nighttime dramas and increased reruns instead. 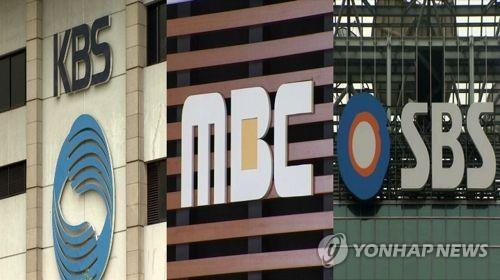