Early this year, HDC Hyundai Development Co. reported its planned takeover of Asiana Airlines to six countries -- the United States, China, Russia, Kazakhstan, Uzbekistan, and Turkey -- to which the airline offers services, for their review of the integration of the two companies.

HDC has yet to obtain approval from the five other countries.

The HDC-Mirae Asset Daewoo consortium signed a deal to acquire a 30.77-percent stake in Asiana from Kumho Industrial Co., a construction unit of Kumho Asiana Group, as well as new shares to be issued and the airline's six affiliates, for 2.5 trillion won (US$2.2 billion) in December. 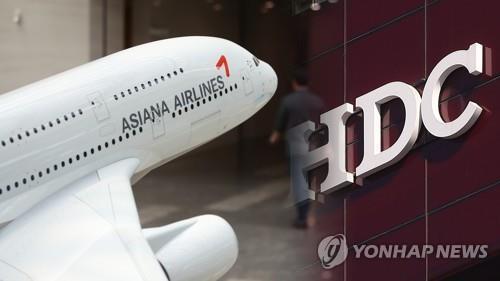 Last week, HDC reiterated its plan to complete the overall process to acquire Asiana by the end of this month, dismissing speculation that it may have difficulties in taking over the company due to fallout from COVID-19.

The speculation started late last month, when Asiana changed the schedule for its rights issue meant to raise funds.

As for the changed schedule, Asiana has said as the six countries have to complete reviewing the two firms' integration, the payment date has been delayed.

"The countries' review process on whether the integration violates global fair trade rules appears to be taking time due to the spreading coronavirus outbreak. Once they complete their reviews, the date for Asiana's rights issue will be fixed," the company said.

Winning an approval from the countries is a prerequisite for Asiana's capital increase.
(END)