SEOUL, April 10 (Yonhap) -- Hoarding of daily necessities in South Korea briefly occurred in late February as the country braced for a sharp rise in the outbreak of the new coronavirus, but the country saw little panic buying of such goods induced by the novel coronavirus in part on the back of a well-built parcel delivery system, industry data showed Friday.

Delivery of basic essentials, such as canned goods and instant noodles, nearly tripled during the fourth week of February compared with a week earlier, according to the data by major logistics player CJ Logistics Corp.

The increased orders came after the country's 31st patient, considered a probable "super spreader" of the COVID-19 outbreak, was confirmed. 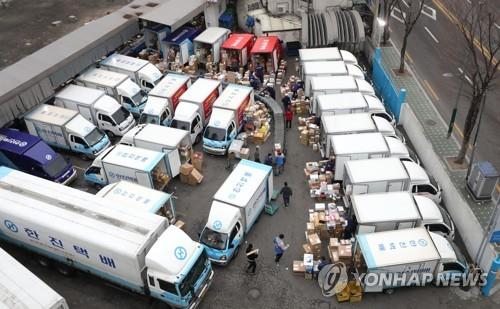 The COVID-19 patient is a congregant of the Shincheonji Church of Jesus, a minor religious sect that is under fire for a large number of its followers testing positive for the virus in Daegu, the city that has become the epicenter of the country's COVID-19 outbreak.

She was the first confirmed case from the religious sect on Feb. 18.

The data showed that the delivery of canned goods tripled on-week in the cited week with instant noodles nearly doubling.

"Delivery greatly increased during the weekend of the fourth week of February, but it seems consumers quickly remained calm after realizing that delivery is smooth," a company official said.

Even with the relatively high numbers of confirmed cases in South Korea in February and March, people in the country have stayed relatively calm and supermarket shelves remain well-stocked. 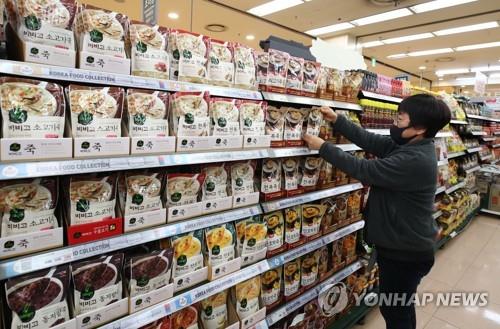 Industry watchers said panic buying comes from fears that the supply of necessities will be cut due to a halt in daily lives.

"There has since been no hoarding even in offline stores and delivery of emergency goods also decreased while delivery of other products in online shopping increased," the official said.

The big data show that well-designed and easy to use parcel delivery services helped curb the occurrence of panic buying, he said.

The country's COVID-19 infections fell below 30 for the first time since Feb. 20 on Friday, according to the Korea Centers for Disease Control and Prevention. The 27 new cases, detected Thursday and down from 39 a day ago, brought the nation's total infections to 10,450.