SEOUL, April 11 (Yonhap) -- President Moon Jae-in commemorated a historic provisional government, set up against Japan's 1910-45 colonial rule of Korea, with a call Saturday for national unity to ride out social and economic crises from the coronavirus.

"Social and economic crises that we face down the road beyond COVID-19 may be even bigger," he said. "But whatever the crisis is, we will overcome it again with the unified power of the people."

He was addressing a ceremony to mark the 101st anniversary of the Provisional Republic of Korea Government and celebrate the groundbreaking for a related memorial hall in Seoul. 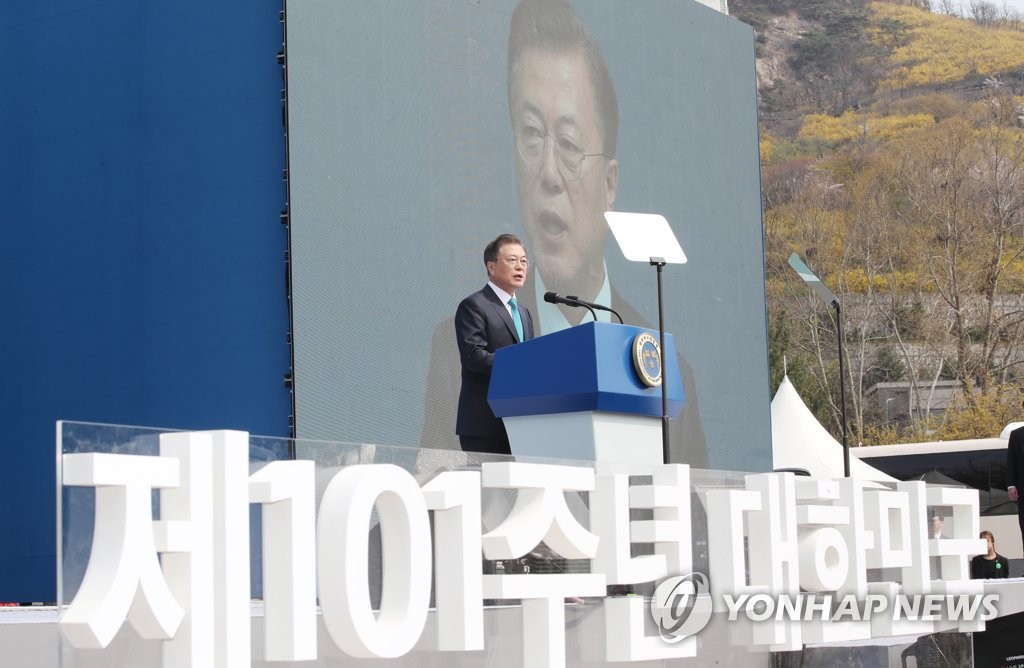 The provisional government was first established in Shanghai in 1919 and moved to several locations in China.

Moon stressed that its spirit has served as a "consistent source of courage" for Koreans whenever they are confronted with hardships and adversities.

It is the "root of the Republic of Korea," he stated, using South Korea's official name.

The spirit of the provisional government will continue to be the biggest force for Koreans today to move toward a better democracy, dream of peace and reunification, and realize the value of inclusiveness and co-prosperity, he added.

In particular, Moon said, the people here will cooperate with each other and also work with the world against the coronavirus pandemic.

"Standing up against it, we have gained a deeper understanding of a world living together," the president said during the event held at Seodaemun Independence Park in western Seoul.

He vowed the government's continued campaign to honor the independence movement, saying it would be "confirmed" to be "the mainstream of our history," not pro-Japanese activities during the colonial era.

Declaring the start of the construction of the memorial hall, Moon said, "The most important reason for it is to keep the spirit of the provisional government by our side as today's history."

In December 2017, Moon visited a provisional government building, which remains in Chongqing, becoming the first South Korean president to do so.

He pledged the construction of a memorial hall in Seoul at that time.