SEOUL, April 12 (Yonhap) -- Kia Motors Corp., South Korea's second-biggest carmaker, is considering temporarily suspending some of its plants in the country later this month due to the fallout from the novel coronavirus pandemic, industry sources said Sunday.

It is planning to halt operations of three factories -- two in Gwangmyeong, south of Seoul, and one in Gwangju, 330 kilometers south of Seoul -- from April 23-29, according to the sources. The company runs nine domestic manufacturing facilities, including one as a joint venture.

The three plants produce most of Kia Motors' export vehicles, including the Sportage and Soul.

Its sister company Hyundai Motor Co. earlier announced plans to suspend a plant in Ulsan on the east coast from this Monday to Friday.

The suspensions came as overseas demand has dropped sharply due to the coronavirus pandemic.

Hyundai Motor is expected to see a 15 percent on-year drop in operating profit for the first quarter, while Kia Motors' first-quarter operating profit is predicted to plunge 44 percent from a year ago.

Hit by the spread of COVID-19, the two carmakers have suspended most of their overseas plants, including those in China and the United States. 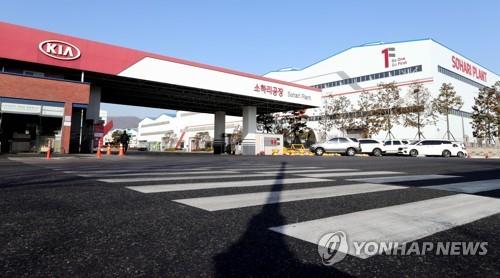