The SPA session had originally been scheduled to take place on Friday. But the North had been silent up until Monday morning about whether it took place as planned or was postponed amid speculation it might have something to do with the coronavirus pandemic.

In Monday's report, KCNA gave no reason why the session was delayed.

Seoul's unification ministry handling inter-Korean affairs said that the date for the SPA meeting might have been adjusted due to some unspecified "political schedules" for the country.

No major decisions were announced either during Sunday's meeting, such as a message to the United States amid long-stalled nuclear negotiations between the two countries or measures related to efforts to prevent an outbreak of the coronavirus.

The KCNA said that Sunday's meeting dealt with budgetary and personnel affairs issues, including electing the country's foreign minister, Ri Son-gwon, as a member of the State Affairs Commission, the North's most powerful decision-making body led by leader Kim.

Foreign Minister Ri's entrance into the commission is not believed to represent any change in his power status because the country's foreign minister has always been an SAC member since the organ was created in 2016.

Ri Son-gwon, who previously dealt with inter-Korean affairs as chairman of the Committee for the Peaceful Reunification of the Country, replaced Ri Yong-ho as the country's foreign minister early this year. The new minister also replaced his predecessor as an SAC member.

First Vice Foreign Minister Choe Son-hui was not named in the report and photos released by state media showed her sitting in the leadership area, suggesting she might remain an SAC member.

Experts said that there appears to have been no such message toward the U.S. during this week's meeting, unlike last April when Kim attended an SPA session and made a policy speech, urging Washington to come up with a new proposal in their nuclear talks.

Nuclear talks have stalled since a no-deal summit between Kim and U.S. President Donald Trump in Hanoi more than a year ago. The talks fell apart as the two sides failed to match Pyongyang's denuclearization steps and Washington's corresponding measures, including sanctions relief.

In late December, leader Kim told a party meeting that he does not feel bound anymore by his self-imposed moratorium on testing long-range ballistic missiles and nuclear weapons, saying that the world will witness a "new strategic weapon" in the near future.

North Korea remains firm that Washington should give up its unilateral demand to resume denuclearization talks.

Last month, Kim Yo-jong, the leader's sister, said in a statement that bilateral relations and dialogue between North Korea and the U.S. "would be thinkable only when the equilibrium is kept dynamically and morally and justice ensured between the two countries, not merely by the personal letter between the two leaders."

This year's parliamentary session was held despite concerns over the coronavirus pandemic and Pyongyang's intensifying efforts to block an outbreak of the infectious disease on its soil.

Sunday's parliamentary session also touched upon budgetary issues, including approval of a 7.4 percent hike in spending on public health, higher than the 5.8 percent increase a year earlier, apparently in consideration of the country's nationwide antivirus efforts.

Budgets for the science and technology and education sectors rose 9.5 percent and 5.1 percent from a year earlier, respectively, KCNA said, adding that spending for national defense will account for 15.9 percent of the country's total expenditures. 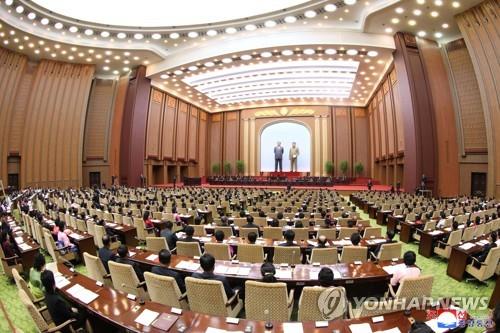