SEOUL, April 13 (Yonhap) -- South Korea's exports fell sharply from a year earlier in the first 10 days of April amid the economic fallout from the new coronavirus, customs data showed Monday.

The country's outbound shipments came to US$12.2 billion in the April 1-10 period, down 18.6 percent from the same period a year earlier, according to the data from the Korea Customs Service. 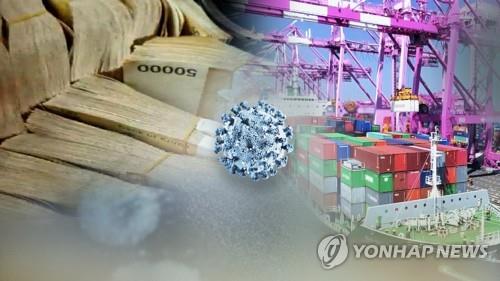 The data came amid growing concerns that the coronavirus pandemic is denting exports by South Korea.

By segment, exports of memory chips, a key item, fell 1.5 percent, and those of automobiles also declined 7.1 percent over the 10-day period from a year earlier.

By country, shipments to China dropped 10.2 percent on-year, while shipments to the United States fell 3.4 percent.

South Korea's trade ministry forecast in January that annual exports would rebound 3 percent this year on the back of the recovery of chips, compared with last year's 10 percent drop.

The coronavirus pandemic, however, has made the goal less feasible. The finance ministry said earlier the economy might contract in the first quarter of the year on weaker exports and private spending.

The South Korean economy grew 2 percent last year, the lowest in a decade, and had been expected to rebound to 2.3 percent growth this year.

The Bank of Korea trimmed its outlook for the economy in 2020 to 2.1 percent from the previous 2.3 percent prediction, with a further cut in its growth estimate likely in the coming months.