SEOUL, April 13 (Yonhap) -- All arrivals from the United States are to be tested for the new coronavirus within three days of self-isolation, starting Monday, health authorities said.

The strengthened measure against COVID-19 was to begin midnight, according to the Korea Centers for Disease Control and Prevention (KCDC). 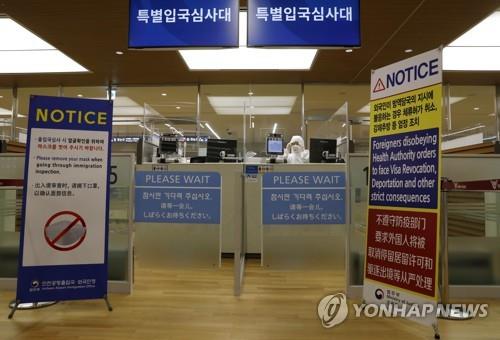 It comes as confirmed cases coming in from the U.S. have been increasing steadily despite a gradual decline in domestic cases.

On Sunday, the number of imported cases was 24, with 18 of them coming from the U.S., followed by Europe with two.

Since March 27, all entrants from the United States have been subjected to strengthened quarantine measures as South Korea grapples with a surge in imported cases of the new coronavirus.

The country has also been enforcing two-week quarantine and virus tests for all long-term arrivals from Europe, regardless of symptoms.

All U.S. arrivals to get tested within 3 days of self-isolation

All U.S. arrivals to get tested within 3 days of self-isolation