SEOUL, April 13 (Yonhap) -- South Korean stocks closed 1.88 percent lower Monday as investors were concerned about the spiraling number of COVID-19 infections in major economies despite signs of a slowdown locally, analysts said. The Korean won sharply fell against the greenback.

South Korea detected 25 cases of COVID-19 on Sunday, bringing the nation's total infections to 10,537, according to the Korea Centers for Disease Control and Prevention. It is the second time since late February that the country's new virus infections have fallen below 30. 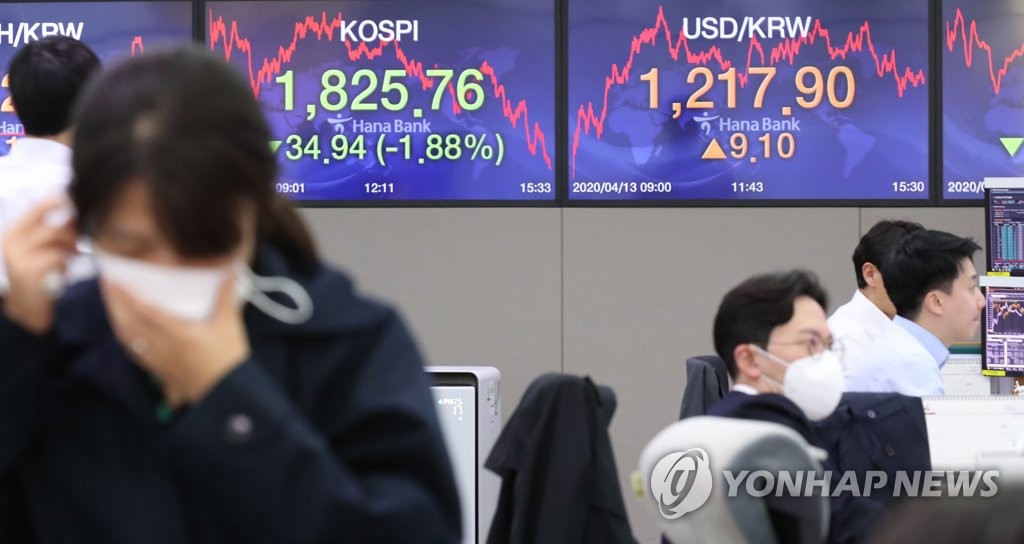 In contrast, the number of infections in the United States and many European countries showed little signs of slowing, with the U.S. reporting more than 550,000 infections so far.

"While there is hope that the number of daily new COVID-19 patients here has already reached its peak, the factor was priced in last week," said Seo Sang-young, a researcher at Kiwoom Securities Co.

South Korea's exports fell 18.6 percent on-year to US$12.2 billion in the April 1-10 period amid the economic fallout from the new coronavirus, customs data showed.

Top steelmaker POSCO advanced 1.69 percent to 181,000 won after it announced a plan to buy its own shares worth 1 trillion won.

Bond prices, which move inversely to yields, ended lower. The yield on three-year Treasurys added 2.6 basis points to 0.996 percent, and the return on the benchmark five-year government bond rose 3.1 basis points to 1.225 percent.