SEOUL, April 14 (Yonhap) -- The number of COVID-19 relapses in South Korea has steadily risen in the past few days, putting health authorities to the test again in the fight against the virus, though the country's new infections have slowed.

According to the Korea Centers for Disease Control and Prevention (KCDC), 124 people had been confirmed as relapsed COVID-19 cases as of Tuesday, up eight from a day earlier. 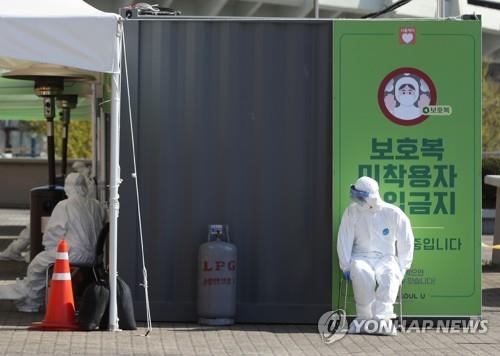 Health authorities said they are striving to find the cause of such cases that could possibly lead to a new source of infections.

"The virus will be divided and incubated, and genes will of course be analyzed," KCDC Deputy Director Kwon Jun-wook said during a daily briefing Tuesday. "We are closely looking into possible genetic changes."

Tracking genetic changes of the COVID-19 virus has been cited as an important factor in developing vaccines and treatment.

A large portion of such cases were reported in Daegu and North Gyeongsang Province, once the epicenters of the virus outbreak here, according to the KCDC.

The KCDC said it is looking into whether those who tested positive again were examples of reinfection or whether the virus reactivated.

"Investigators are looking into whether the cause of relapse is the virus being reactivated or reinfection with the virus. We are also investigating whether relapse cases lead to secondary infection," KCDC chief Jeong Eun-kyeong said on Monday.

Jeong also said the KCDC is working closely with the World Health Organization (WHO) to investigate cases of people testing positive after being released from treatment.

The KCDC said it is looking to determine whether patients who recover from COVID-19 are immune to the disease and how long such immunity lasts.

So far, there have not been reports on whether those who retested positive infected others.

Health authorities have said the virus was highly likely to have been reactivated, instead of the people being reinfected, as they tested positive again in a relatively short time after being released from quarantine.

In South Korea, patients must test negative in two tests within 24 hours before they are released from quarantine and deemed fully recovered.

The country reported 27 additional COVID-19 cases Tuesday, bringing total infections to 10,564. It marked the second day in a row that new infections have fallen below 30. On Monday, the country posted 25 new cases.

On Feb. 29, the country reported the first case of reinfection of the new coronavirus.