The country reported 27 new cases of COVID-19 on Tuesday, bringing the nation's total infections to 10,564, according to the Korea Centers for Disease Control and Prevention. The new coronavirus cases stayed below 30 for the second straight day. 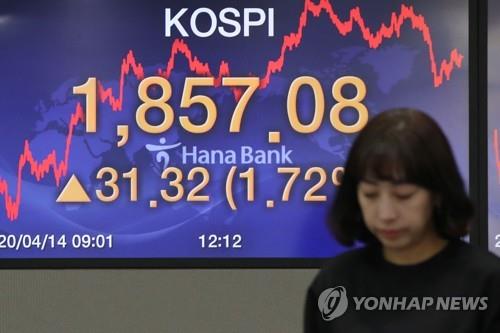 Bio shares were also higher. Pharmaceutical firm Bukwang Pharm skyrocketed 24.49 percent to 27,700 won on news it has won approval for clinical trials of its treatment drug for the novel coronavirus.

The local currency closed at 1,217.3 won against the U.S. dollar, up 0.6 won from the previous session's close.

Bond prices, which move inversely to yields, ended flat. The yield on three-year Treasurys was unchanged at 0.996 percent, and the return on the benchmark five-year government bond remained flat at 1.225 percent.