Two South Korean test kit makers have signed contracts with the U.S. Federal Emergency Management Agency (FEMA) to export their diagnostic equipment after they won pre-emergency use authorization from the U.S. Food and Drug Administration.

The test kits, enough to run as many as 600,000 tests for the coronavirus, had originally been scheduled to depart on a U.S. cargo flight late Tuesday, but shipment was rescheduled for early Wednesday, a foreign ministry official said on condition of anonymity without specifying reasons.

Another company that has also won the preliminary FDA approval for its test kits has completed its delivery of the goods, capable of conducting as many as 150,000 tests, to its U.S.-based agency.

The U.S. has expressed appreciation for Korea's supply of the COVID-19 testing kits.

"We are grateful to our Republic of Korea partners for assisting the United States in procuring COVID-19 tests, and for its support to the people of the United States," a senior U.S. goverment official told Yonhap News Agency.

Later in the day, U.S. Ambassador to South Korea Harry Harris tweeted a similar message, along with a picture of a box of the test kits being loaded for delivery at Incheon International Airport, west of Seoul.

"#COVID19 test kits were just loaded at Incheon airport & are bound for the U.S. The #USROKAlliance is ironclad and we're grateful to @mofa_kr for helping make this purchase by @fema possible. #WeAreInThisTogether."

More local test kit producers are expected to gain approval, given the high demand for the diagnostic devices amid the urgent situation in the U.S., now the country with the highest infection caseload of over 580,000. 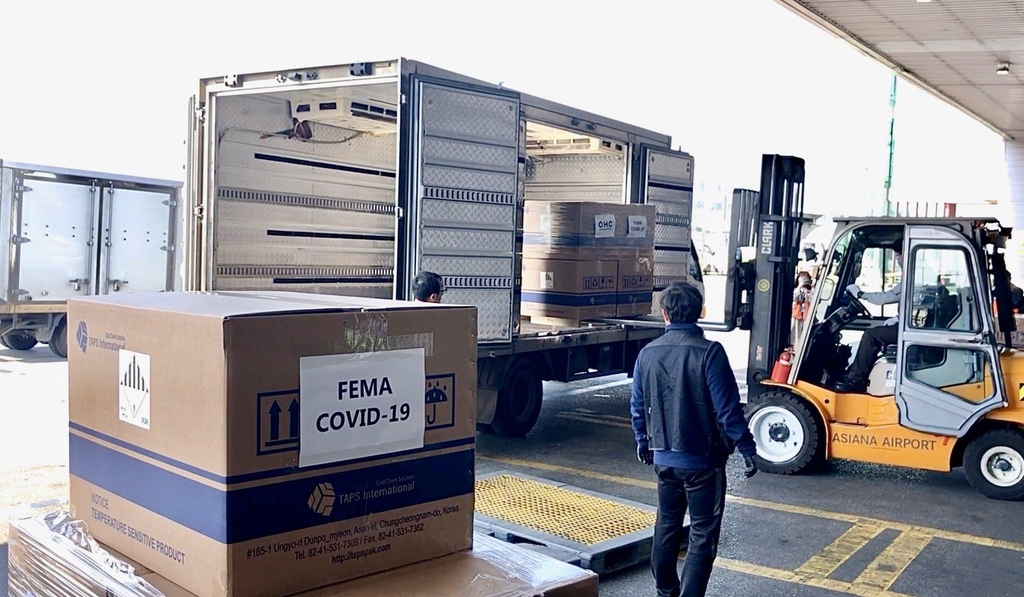