SEOUL, April 14 (Yonhap) -- Unionized workers at Renault Samsung Motors Corp. voted Tuesday to accept an agreement with the company over wages for last year as the automobile industry is struggling to cope with the impact of the coronavirus outbreak.

The wage deal represents a consensus between the company and the union to make joint efforts to weather the impact of the coronvirus outbreak on the automobile industry, it said. 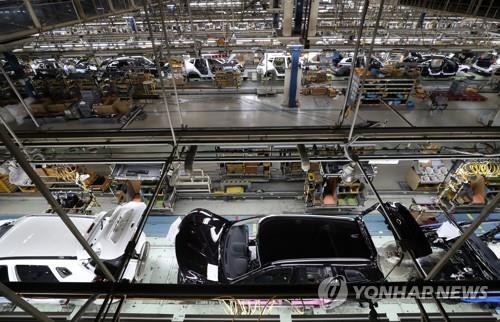 The company and the union had held 19 rounds of wage negotiations since September. Union workers held a two-week partial strike in January, causing production losses of about 10,400 vehicles worth about 200 billion won.

To avoid further losses from walkouts, the company shut down its sole plant in Busan, 453 kilometers south of Seoul, for the nighttime shift from Jan. 10. It was the second time that the company partially shut down the plant after it took a similar step for one day during wage negotiations with the labor union in May 2018.

In late January, the union suspended partial strikes undertaken in protest against the company's wage freeze proposal and voluntary retirement program, so they could resume talks in February.

To offset the reduction in Rogue production, Renault Samsung badly needs to secure export volume for the XM3 compact SUV, but the company is still in talks with its parent company Renault and no decision has been made yet.