WASHINGTON, April 14 (Yonhap) -- The United States calls on North Korea to avoid provocations and return to denuclearization negotiations, the State Department said Tuesday, after North Korea launched a barrage of missiles into the sea.

Earlier Tuesday, North Korea fired what appeared to be cruise missiles and air-to-ground missiles in the latest in a series of weapons tests, according to South Korea's military.

"We are aware of media reports and are currently assessing the situation," a department spokesperson told Yonhap News Agency.

"We continue to call on North Korea to avoid provocations, abide by obligations under U.N. Security Council Resolutions, and return to sustained and substantive negotiations to do its part to achieve complete denuclearization," he added.

A senior U.S. government official said earlier that the United States was aware of reports of "projectiles" launched from North Korea.

The missiles were fired on the eve of the late North Korean founder's birthday and South Korea's general elections.

The country has conducted multiple tests in recent weeks, apparently to boost its defense capabilities amid stalled nuclear talks with the U.S. and maintain military discipline in the fight against COVID-19. 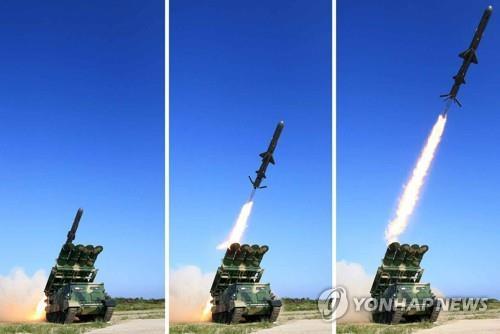