WASHINGTON, April 14 (Yonhap) -- U.S. Defense Secretary Mark Esper said Tuesday that he continues to believe South Korea can and should pay more for the stationing of American troops on the peninsula.

Speaking at a Pentagon press briefing, he did not directly address a question about a recent Reuters report that President Donald Trump rejected South Korea's offer to increase its contribution by at least 13 percent from last year.

"I defer to the State Department on that," he said. "They're leading the negotiations."

But he noted that he has spoken with South Korean Defense Minister Jeong Kyeong-doo, and "my view remains that South Korea is a close and trusted ally of ours, but they're a wealthy country."

"They can and should pay more to help for our mutual defense and their specific defense," he said.

The two countries have been in drawn-out negotiations to renew their defense cost-sharing deal, known as the Special Measures Agreement.

The U.S. has demanded as much as US$5 billion from South Korea, or more than five times the $870 million Seoul agreed to pay under the previous SMA, which lapsed at the end of last year.

Citing the absence of a new agreement, U.S. Forces Korea has placed some 4,000 South Korean employees on unpaid leave since the beginning of the month.

A senior U.S. government official told Yonhap News Agency a day earlier that his country is "grateful" to South Korea for its assistance in procuring the test kits and for its support to the American people.

On the coronavirus pandemic, U.S. Joint Chiefs of Staff Chairman Gen. Mark Milley said it created the risk of instability in countries such as Afghanistan, Iraq and Syria.

"We don't have as good insight into North Korea as we would other countries, but we are convinced that they are challenged as well," he said at the briefing. 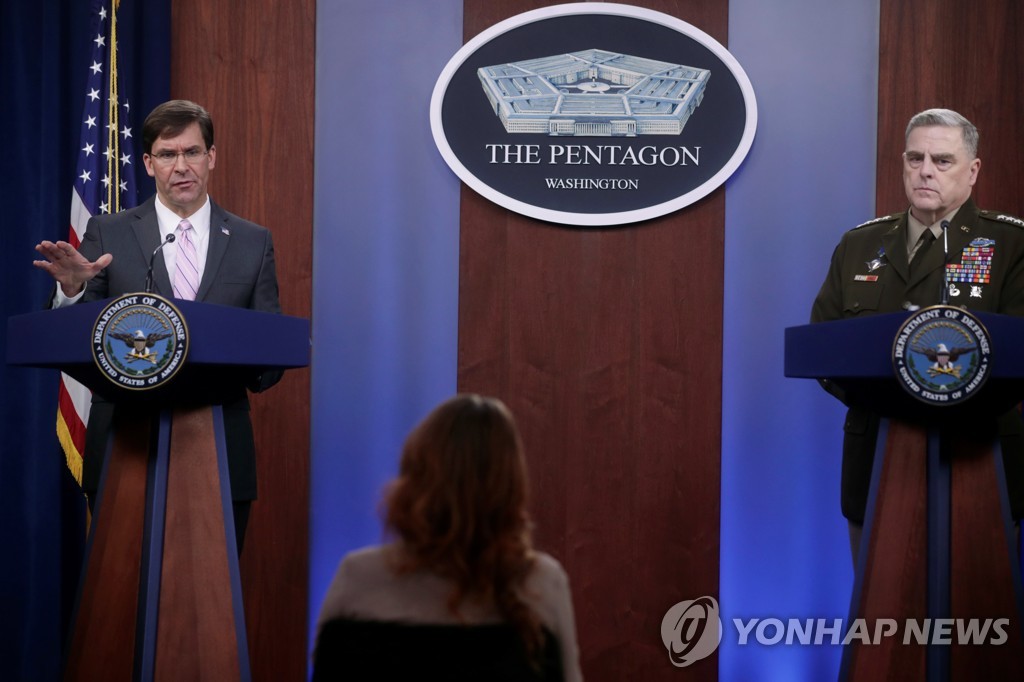 Esper: S. Korea can and should pay more for U.S. troops

Esper: S. Korea can and should pay more for U.S. troops