"Record high voter turnout yesterday is a testament to South Korea's dedication to democratic ideals even in the face of the #COVID19 crisis. Congratulations on the general elections #ROK!," he tweeted.

In Wednesday's quadrennial elections, the ruling Democratic Party and its satellite party clinched a landslide victory by securing 180 seats in the 300-seat National Assembly. The polls had a 66 percent voter turnout, the highest in 28 years.

The elections took place under strict measures, with people wearing masks and gloves to cast their ballots in the midst of the virus outbreak. The high voter turnout appears to indicate the public is giving the Moon Jae-in government credit for its handling of the pandemic.

South Korea has gained global recognition for its containment efforts through advanced diagnostic testing and quarantine systems, with growing requests from other countries to share its experience and know-how.

The ambassador's tweet follows a similar congratulatory post by U.S. Secretary of State Mike Pompeo, which Harris has retweeted. Pompeo described the polls as "successful legislative elections in the face of a global pandemic," saying Korea is a model for the world. 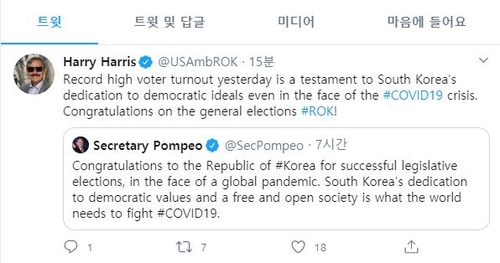