SEOUL, April 16 (Yonhap) -- South Korean health authorities said Thursday they will monitor a possible rise in the number of new confirmed coronavirus cases after the country held its parliamentary elections for up to two weeks.

On Wednesday, South Korea became the first major country to successfully hold nationwide polls since the COVID-19 crisis began sweeping the globe. Voter turnout was the highest in 28 years, according to an election watchdog, with the ruling party clinching a landslide victory.

Tightened measures were taken at polling stations as voters wore face masks and had their temperatures checked at the entrance. Voters disinfected their hands with sanitizers and put on plastic gloves before casting ballots. 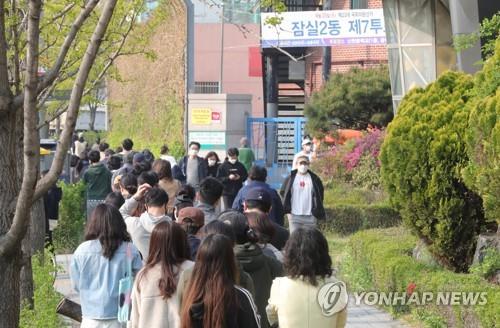 "Considering the incubation period of COVID-19, we have to wait one or two weeks to see whether our quarantine measures on the voting day have really worked," Vice Health Minister Kim Ganglip said.

South Korea recorded around 50 or fewer daily new cases over the past week, a sharp drop from the Feb. 29 peak of 909 new cases. On Thursday, a record low of 22 new COVID-19 cases were reported, bringing the nation's total infections to 10,613.

However, concerns have surfaced that the number could be above 50 as more than 10,000 people under self-isolation measures went to the polling stations across the country.

A total of 11,151 out of 13,789 eligible voters in two-week self-quarantine cast their votes, according to government data.

Those without fever or respiratory symptoms were permitted to leave their homes between 5:20 p.m. and 7 p.m. so they could cast their ballots after 6 p.m., when polling stations closed for other ordinary voters.

They were monitored through a mobile application and required to maintain distance at polling places, while disinfection workers dressed in full protective suits.

Health authorities said a total of six self-quarantine voters voluntarily left their routes, with three of them expected to face criminal charges.

Concern over possible spike in new coronavirus cases after election

Concern over possible spike in new coronavirus cases after election