SEOUL, April 16 (Yonhap) -- A reporter quarantined for nearly a month in North Korea has said the communist nation was following strict coronavirus guidelines, including taking the temperatures of those quarantined three times a day.

Roh Geum-soon, a journalist at the Choson Sinbo, a pro-North Korea newspaper in Japan, also said in a YouTube video posted Sunday that she was not allowed to go out of her hotel in Pyongyang during the quarantine period.

Roh said she was quarantined for 30 days, though she did not specify the exact dates.

"Six days before the World Health Organization declared the pandemic, on January 24, (North Korea) launched a national emergency system and followed its own anti-virus measures," Roh said in the video posted on the YouTube channel Pyongtong run by a group of Korean-Japanese people.

North Korea has closed all ports of entry by land, sea and air as part of its efforts to block the COVID-19 virus from entering the country.

All foreigners and overseas Koreans entering the country have since been taken to an isolated facility in Pyongsong city in South Pyongan Province, Roh said.

Roh said doctors checked her body temperature three times a day, and people whose body temperatures reached over 37.5 C were taken to the isolated facility in Pyongsong.

"Without a mask, we were not allowed to ride the bus, or go inside shops or offices ... they were that strict," she said.

North Korea also ordered its people to wear masks, with the goal of producing tens of thousands in factories and homes, according to Roh.

North Korea has not reported any COVID-19 virus infections, but it has called for nationwide efforts to prevent an outbreak in the country, including intensified border controls and a tightened quarantine process. 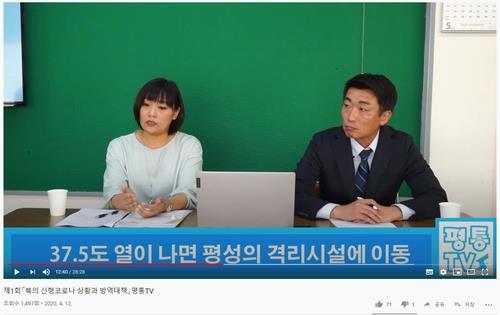