SEOUL, April 17 (Yonhap) -- An 18-year-old alleged co-conspirator of a high-profile digital sexual exploitation ring was forced to stand in front of the public Friday following an earlier police decision to disclose his identity and face.

Kang Hun appeared before reporters Friday morning before being handed over to the prosecution for further investigation and an indictment.

He was put under pretrial detention about a week ago for allegedly acting as an accessory to the operation of the "Baksabang" chatroom on the messaging service Telegram, which allowed paid members to view illegally taken photos and videos of violent sex acts involving underage girls. 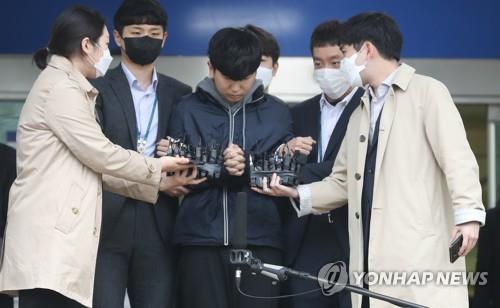 It is the first time in South Korea that the police have made public the identity of a minor criminal suspect.

Kang stood handcuffed and grim in front of photographers without covering his face as he was moved from the detention room of the Jongno Police Station in downtown Seoul to the custody of prosecutors around 8 a.m.

"I'm sorry. I sincerely apologize and feel sorry," Kang told reporters, with his head down.

He did not respond to questions about whether he admits his charges and disagrees with the disclosure of his identity.

The Seoul Metropolitan Police Agency on Thursday announced its decision to make public Kang's full name, age and face, saying the disclosure corresponds to public interest in terms of people's right to know and the prevention of similar crimes. The current law permits the disclosure of the identity of sex offenders but grants exceptions for minors.

Later in the day, Kang's lawyer filed for suspension of the execution of the identity disclosure, but the Seoul Administrative Court rejected the request.

Kang is accused of having recruited and managed paid members of Baksabang (Korean for doctor's room), producing and distributing sexual abuse material, and delivering criminal proceeds from the chatroom to its founder Cho Ju-bin.

Cho, a 24-year-old, has been indicted for allegedly blackmailing women into providing sexual videos to the illegal Telegram chatroom.