SEOUL, April 17 (Yonhap) -- An American contractor working at U.S. Forces Korea's Camp Humphreys was barred from all USFK installations for two years for visiting the base in violation of a self-isolation order imposed after coming into contact with a coronavirus patient.

It is the first disciplinary action by USFK against a non-uniformed individual, as the U.S. military has been on high alert to stem the COVID-19 virus.

The contractor at Camp Humphreys in Pyeongtaek, some 70 kilometers south of Seoul, was instructed to quarantine after coming into direct contact with a co-worker who tested positive for the virus.

But he violated the isolation directive and visited the PX and commissary, USFK said in a notice uploaded on its Twitter account.

"This individual's disregard for USFK's public health guidance and health protection conditions jeopardizes the safety of all USFK personnel and families," USFK said, explaining the reasons for the two-year ban, effective Tuesday.

Then in April, three Army specialists and one sergeant first class were punished for visiting or drinking at bars in violation of the authorities' public health guidance. They either faced pay forfeiture or a lowering of their rank.

As South Korea has seen fewer numbers of confirmed virus cases and USFK has managed to flatten the curve of new infections, the U.S. military has eased some of restrictions recently, such as the lifting of the partial shutdown on major facilities in Camp Humphreys and Osan Air Base located nearby.

But it has warned against any loosening of vigilance and vowed earlier in the day to "routinely publish" the results of noncompliance enforcement actions.

So far, USFK has reported 24 coronavirus patients, and 10 of them have fully recovered. Nationwide, South Korea had 10,635 confirmed cases, including 230 deaths, with the number of fresh infections coming below 30 for the fifth consecutive day on Friday. 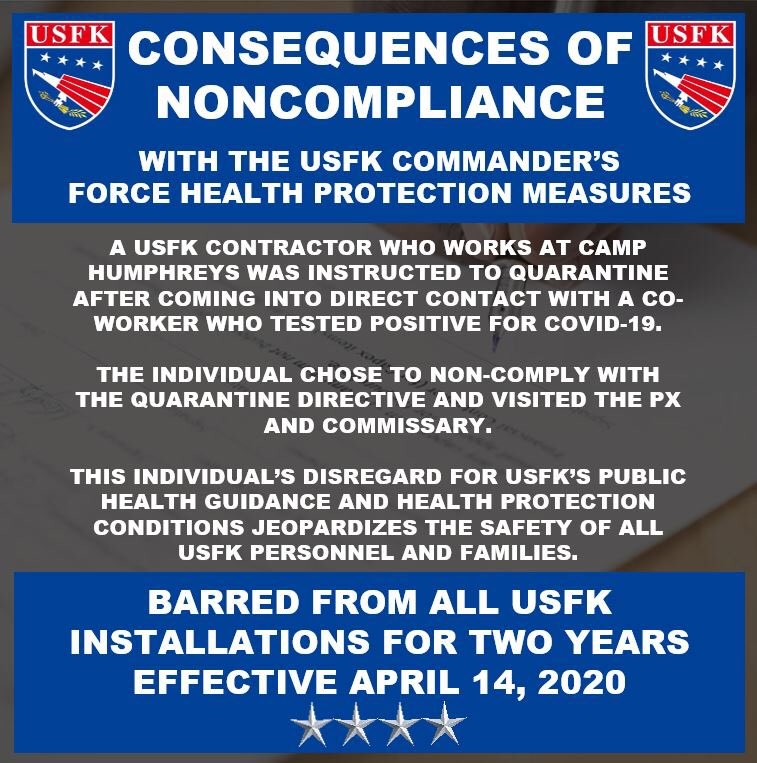