SEOUL, April 17 (Yonhap) -- Tens of thousands of South Koreans have signed a petition calling for the mandatory construction of residential flats for North Korean defectors in the ritzy district of Gangnam, southern Seoul, following a high-profile defector's election in the constituency.

In apparent derision of the Gangnam residents who elected Tae Ku-min in Wednesday's legislative election, an anonymous petition was filed on the website of the presidential office on Thursday, demanding the government oblige builders to reserve a certain number of units to defectors when they rebuild or redevelop apartments in the ward.

More than 100,000 citizens had signed the petition as of Friday.

"I express deep respect for the residents of Gangnam who overcame the wall of Cold War ideology to pick Tae Ku-min," the petitioner wrote, referring to the former No. 2 diplomat at North Korea's Embassy in London, whose previous name was Thae Yong-ho. 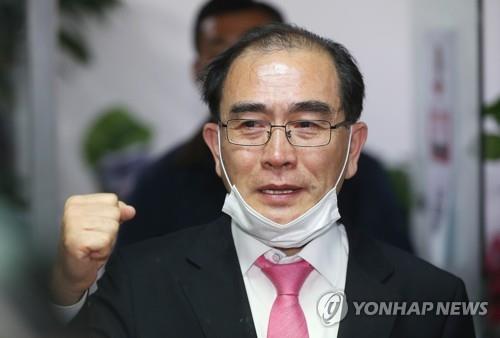 Thae, who defected to the South in 2016, ran in the general elections as a candidate for the conservative United Future Party. Before the elections, he changed his name to Tae Ku-min, expressing his will to "rescue North Korean people." Ku-min means "save people."

Thae won 58.5 percent of the vote to become the country's first North Korean defector to win a constituency seat in parliament.

Gangnam is traditionally considered a stronghold for conservatives.

"There will certainly not be many opponents (to the proposal), given the high political consciousness of Gangnam residents," the person wrote, "If (defectors) experience the affluent lifestyle of Gangnam, their affection for the Republic of Korea will be likely to grow."

The petition appears intended to ridicule voters in Gangnam, who some criticize as being sensitive to property prices, which led them to elect Thae mostly due to his association with the conservative bloc.

Meanwhile, it was not only the petition signers who noticed the recent election results.

North Korean propaganda outlet Meari reported that Gangnam has "sank to a den of corruption."

While the outlet did not specifically mention Thae, it was seen as a rare report highlighting a certain neighborhood in the South.

Meari went on to describe the Thae's constituency as a hotbed of gambling and drug use, where police are powerless.
(END)