The new cases brought the country's total infections to 10,653, according to the Korea Centers for Disease Control and Prevention (KCDC).

It is the first time since Feb. 20 that the country's new COVID-19 infections came below 20. Over the past five days, the country reported fewer than 30 new patients per day.

The number of South Korea's daily new cases reached a peak of 909 on Feb. 29, but the country has since managed to flatten the curve amid stringent quarantine and social distancing measures. 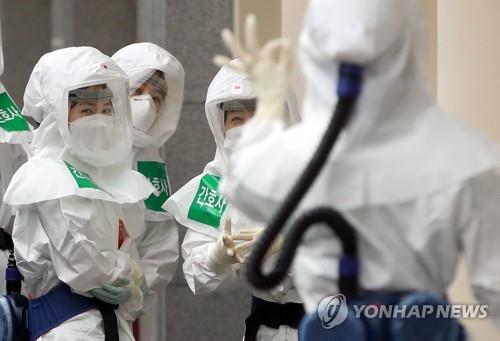 Seoul and Gyeonggi Province reported one and four more cases, respectively, it added.

Nine of the fresh infections were from abroad, with four being detected at border checkpoints. The total number of imported cases is now at 992.

Despite the downward trend, the government has been on high vigilance and called for strict adherence to anti-virus measures and the social distancing campaign.

Prime Minister Chung Sye-kyun asked the public to keep up with social distancing as concerns rise over its possible loosening during upcoming holidays, which could span for about a week starting at the end of this month.

From March 22, the government has intensified its drive, forcing all major public facilities, including schools and private gyms, to shut down to stop the spread of the virus, and it is expected to announce soon its decision on whether to further extend the guidance, which is supposed to be in effect until Sunday.