SEOUL, April 19 (Yonhap) -- South Korea will resume an independent project of excavating remains of soldiers killed during the 1950-53 Korean War in the Demilitarized Zone (DMZ) this week, the defense ministry said Sunday, as Pyongyang remains unresponsive to calls to work together as agreed.

Under the bilateral military accord signed on Sept. 19, 2018, Seoul and Pyongyang had planned to carry out the excavation project together on Arrowhead Ridge, one of the fiercest battlefields during the war.

But South Korea carried out the project alone last year, as the North did not accede to calls for joint implementation.

"The defense ministry will resume the work for this year to remove landmines and retrieve remains on our side of Arrowhead Ridge starting on Monday as preparations to implement the inter-Korean project just as agreed in accordance with the Sept. 19 military pact," the ministry said in a release.

Last year, the military discovered 2,030 bone pieces believed to have belonged to about 261 troops killed in the war, according to the ministry. Around 300 soldiers from South Korea, the United States and France are believed to be buried on the ridge.

"We will continue to make efforts to encourage the North to respond and will make preparations proactively to launch the joint project at any time," the ministry added. 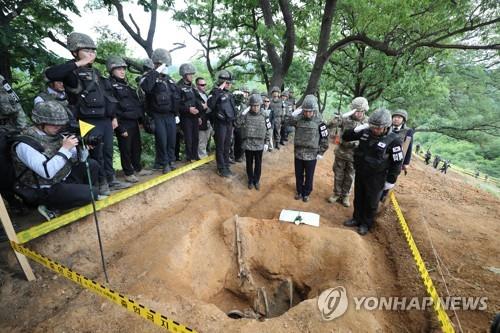