SEOUL, April 19 (Yonhap) -- U.S. Ambassador Harry Harris said in a tweet Sunday that the Global Hawk high-altitude unmanned aircraft was delivered to South Korea this week, adding that it's a "great day" for the two countries' alliance.

Harris unveiled a picture of a Global Hawk unit parked in a hangar in an unidentified location, with the national flags of the allies hanging on a wall behind. On the body of the aircraft was text reading "the Air Force of the Republic of Korea," in Korean.

"Congratulations to the U.S.-ROK Security Cooperation teams on delivering Global Hawk to the ROK this week. A great day for ROKAF and the ironclad #USROKAlliance. @USForcesKorea," he tweeted.

The ambassador did not give details in the tweet about how many units were delivered.

Under a 2011 deal, Seoul purchased four units from the United States. One remaining unit is expected to arrive here within the first half.

It is expected to enhance Seoul's reconnaissance capabilities in the face of persistent threats by North Korea, as well as growing security challenges from neighboring countries. 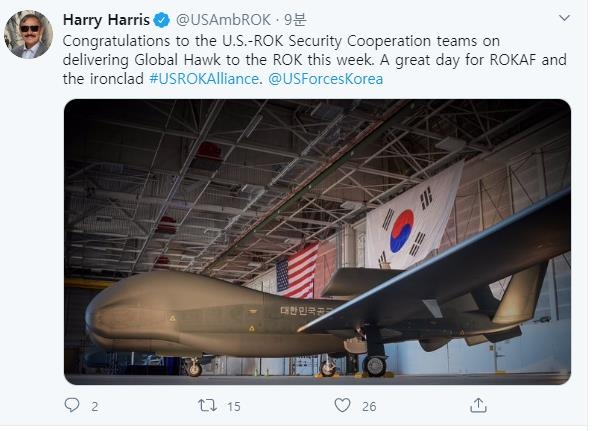