Trump made the remark during a daily coronavirus briefing on Saturday, insisting that his relationship with the North's leader remains good.

But the North rejected Trump's claim.

"He could have referred to the personal letters that had been exchanged in the past, we are not sure. But there was no letter addressed recently to the U.S. president by the supreme leadership of the DPRK," said the chief of the foreign service news department at the North's foreign ministry.

"We are about to look into the matter to see if the U.S. leadership seeks anything in feeding the ungrounded story into the media," the official said in a statement carried by the official Korean Central News Agency.

DPRK is the acronym for North Korea's office name, the Democratic People's Republic of Korea. 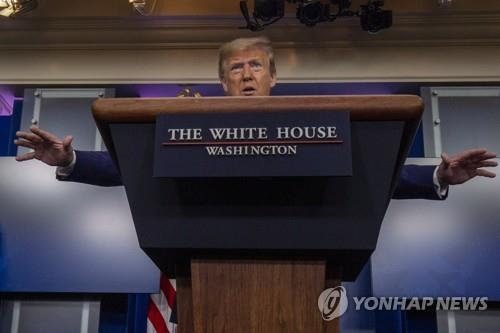 The two countries have failed to make progress in denuclearization negotiations since a February 2019 summit between Trump and Kim ended without a deal.

But the leaders have maintained personal correspondence.

In January, Trump sent a congratulatory message to Kim for his birthday.

Earlier Sunday, an official at South Korea's presidential office Cheong Wa Dae also said that Trump had mentioned the "nice note" when he spoke by phone with President Moon Jae-in on Saturday.

The official did not elaborate, saying it's not appropriate for Cheong Wa Dae to do so.
(END)