SEOUL, April 20 (Yonhap) -- The government should take aggressive measures to prevent a possible jump in unemployment due to the outbreak of the novel coronavirus, a private think tank said Monday.

The Korea Economic Research Institute (KERI) said it has proposed a list of 10 labor policy tasks to the labor ministry in an effort to keep the COVID-19 outbreak from sparking massive joblessness in the country.

The policy recommendations includes the payment of unemployment benefits to furloughed workers for three months and the provision of government loan guarantees for small businesses taking out low-rate loans to keep employees on their payrolls.

KERI under the Federation of Korean Industries, the nation's big business lobby, also suggested the government freeze the country's minimum wage and allow the extension of working hours when agreed upon by labor and management. 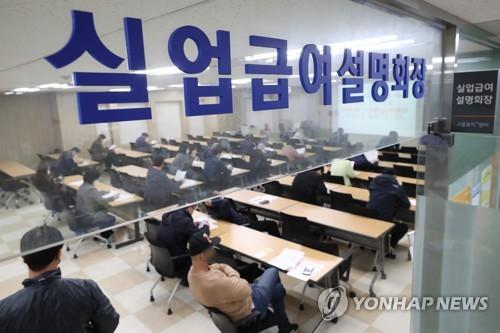 The government should also expand a flexible work system and allow big businesses to hire dispatched workers, the institute said.

KERI's recommendations come as a prolonged coronavirus crisis is feared to cause the South Korean economy to shrink sharply this year, resulting in a spike in the country's joblessness.

In the worst case scenario, the number of newly unemployed workers is estimated to reach up to 333,000 this year, KERI said, adding that nearly 922,000 South Korean were left out of work in the wake of the country's 1998 foreign exchange crisis.

The scenario is based on the latest forecast by Nomura Securities of Japan that Asia's fourth-largest economy may contract 6.7 percent this year from a year ago due to the fallout of the COVID-19 outbreak.

The coronavirus pandemic has been weighing on the export-focused South Korean economy as the disease has led to massive lockdowns and factory shutdowns globally.