SEOUL, April 20 (Yonhap) -- South Korea resumed excavating remains on its own of soldiers killed during the 1950-53 Korean War in the Demilitarized Zone (DMZ) Monday, the defense ministry said, as Pyongyang remains unresponsive to calls to work together as agreed.

Under a bilateral military accord signed Sept. 19, 2018, the two Koreas agreed to launch a joint excavation project on Arrowhead Ridge, one of the fiercest battlefields during the war. But the South carried out the project alone last year, as the North did not respond to calls for joint work.

"A slew of the Korean war dead still remain buried inside the DMZ, including Arrowhead Ridge. It is our noble duty to bring those heroes back to their families," said Maj. Gen. Lee Sang-chul, who leads the 5th Division of the Army in charge of the mission.

"Based upon experiences and thorough preparations, we will continue our operations in a perfect manner while maintaining a full readiness posture," Lee added. Last year, the military discovered 2,030 bone pieces believed to belong to about 261 troops killed in the war.

The defense ministry vowed to make continued efforts to encourage North Korea to join the project. 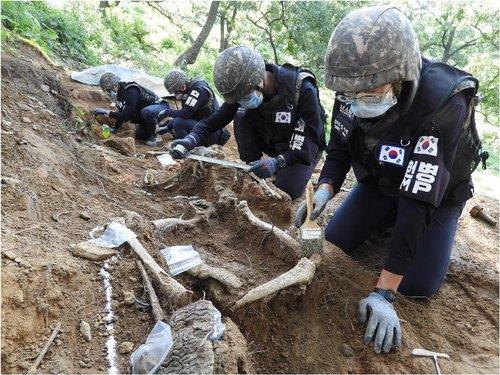