SEOUL, April 20 (Yonhap) -- U.S. Ambassador Harry Harris' recent tweet about the arrival of Global Hawk unmanned aircraft in South Korea has sparked controversy over whether it is appropriate to reveal developments regarding sensitive military assets that Seoul does not want to publicize.

On Sunday, Harris said on his Twitter account, "Congratulations to the U.S.-ROK Security Cooperation teams on delivering Global Hawk to the ROK this week," with a photo of two units of RQ-4 Block 30 Global Hawk Remotely Piloted Aircraft (RPA).

The text on the body of one aircraft read "the Air Force of the Republic of Korea" in Korean, but he did not give further details, including where the photo was taken and exactly when and how many units arrived in South Korea.

Military sources here belatedly confirmed that the plane arrived last week, adding that the photo appears to have been taken before their delivery.

Under a 2011 deal, Seoul purchased four units from the U.S., and the first one was brought over in December last year. One remaining unit is expected to arrive here within the first half of this year.

"Our basic stance is that we do not publicize such things for security reasons. Global Hawk is a key surveillance asset, though we understand high public interest in it," a source said.

"(The tweet) could be seen as an act of diplomatic discourtesy, as South Korea does not want to make the arrival public," he added.

Other sources said the ambassador, as a former military commander, is known to be interested in those assets, and he might see its smooth delivery as a sign of the strong alliance between Seoul and Washington.

In November, Harris revealed the arrival of two F-35A next-generation fighter jets in South Korea via his Twitter. The South Korean military decided not to hold any public events to celebrate its introduction, citing the sensitivity of the issue.

Asked about the government's official stance during a regular briefing on Monday, deputy defense ministry spokesperson Moon Hong-sik said that it is "not appropriate for the ministry to comment on the tweet."

He only said the defense ministry is "aware of the arrival of Global Hawk, and its deployment will be pushed for normally."

South Korea has introduced such advanced weapons in a move to beef up reconnaissance capabilities in the face of persistent threats by North Korea, as well as growing security challenges posed by neighboring countries. 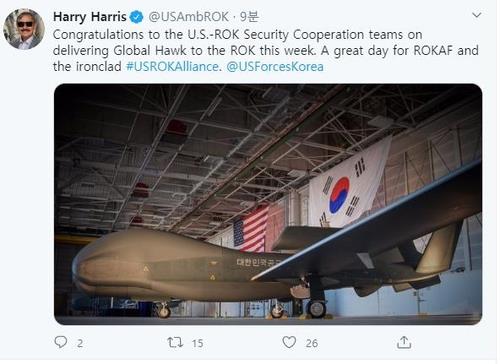