SEOUL, April 20 (Yonhap) -- Foreigners' appetite for South Korean stocks is tipped to grow down the road due to the general election results from last week and improving situations over the new coronavirus here, analysts said Monday.

Their shift toward a buying mode pushed up the benchmark Korea Composite Stock Price Index (KOSPI) to the highest in six weeks amid eased concerns over the COVID-19 outbreak, stoking talks among players of whether their buying will continue or not.

On Sunday, new virus infections in South Korea fell to a single digit for the first time since Feb. 18, with 8 new patients added. 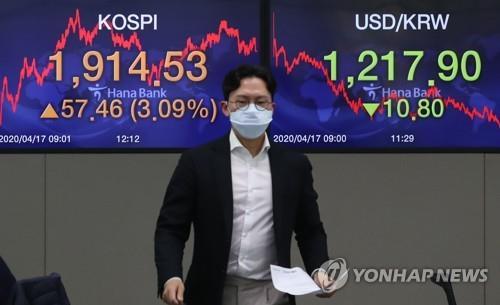 Of the 300 seats up for grab, the ruling Democratic Party secured 60 percent.

In the election period, the ruling party had pledged to boost the manufacturing sector including chips, autos, parts and bio, foreigners' traditional favorites.

According to the survey conducted by Yonhap Infomax, South Korea's economy in January-March is expected to contract 1.81 percent on-quarter.