"Stress tests suggest that banks and insurers, in aggregate, can weather severe macro financial shocks, although some banks would make use of capital conservation buffers," the IMF said in report on the Financial Sector Assessment Program posted on its website. 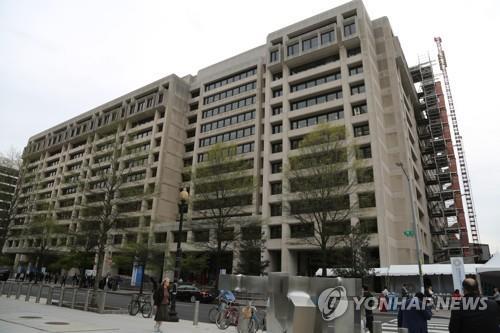 The program, a comprehensive and in-depth analysis of a country's financial sector, assessed the stability of financial systems of South Korea, the United States, Italy and nine other countries.

South Korea's household debt came to 1,504.4 trillion won (US$1.23 trillion) at the end of December, according to the Bank of Korea.

Household lending growth, primarily related to housing, has slowed but remains above the nominal growth of gross domestic product, while household debt, as a ratio of disposable income, stands at about 180 percent, among the highest in the Organization for Economic Cooperation and Development (OECD), a group of 36 mostly rich and advanced nations.

Around 15 percent of South Korea's total household debt is currently registered at-risk and around 11 percent at solvency risk, according to the IMF.

South Korea has demonstrated a strong willingness to act on household sector risks, and as many as 18 macroprudential and other measures have been taken to curb credit to households and housing price growth, according to the IMF.

The IMF said the demographic shift in South Korea is raising concerns that Asia's fourth-largest economy might be destined for low levels of capital formation and a prolonged period of low growth and inflation, with an erosion of its financial buffers.

The world's third-largest pension fund with $600 billion in assets is still in an accumulation phase and expected to grow until 2041, when benefit payments would start exceeding contributions.

"Leaving parameters unchanged, the fund will be depleted by 2057," the IMF said, adding that options to cope with long-term sustainability concerns include reducing benefits, increasing contribution rates, increasing the retirement age, broadening membership through an increase in female labor force participation and increasing targeted investment returns.