Speaking at his weekly meeting with senior Cheong Wa Dae aides, Moon said the foremost task is to overcome the national crisis, namely protecting the lives of the people and reviving the economy.

South Korea, the vanguard of the global war against the virus, would certainly win its own fight and give the international community hope, he emphasized.

"Mankind is now staging a world war against the novel virus. ... The global economy is falling into the worst slump since the Great Depression," Moon said.

He described the death toll and economic damages worldwide from the anti-virus war as "extreme and severe" enough to be called World War III.

"We are at the forefront of this war. We will be sure to triumph and create hope," he said. "Our people have not lost to a crisis even a single time." 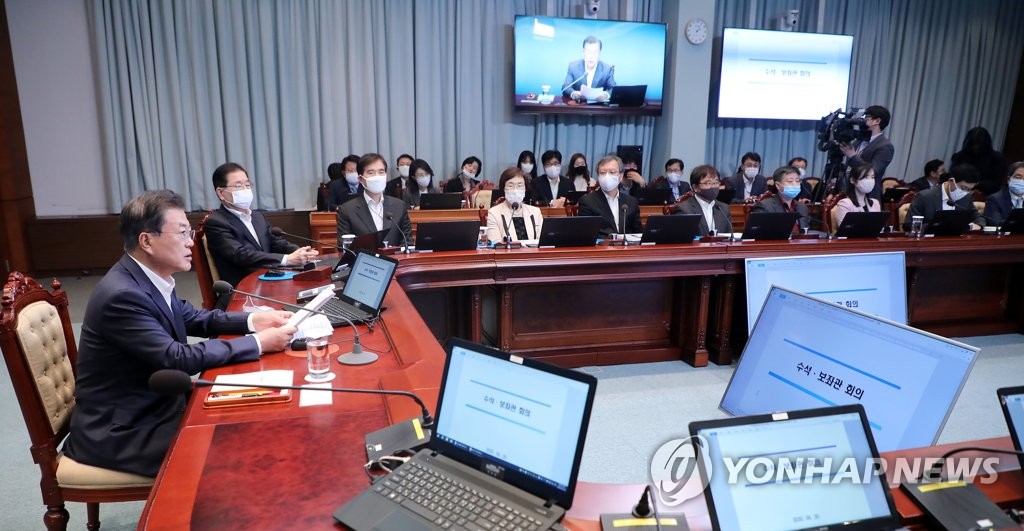 Moon said South Korea will emerge as the first country to overcome the crisis, turn it into an opportunity and sow the seeds of hope globally.

He said it has become a "realistic aim" thanks to voluntary quarantine efforts by citizens here and dedicated services by medical workers.

"Given the global situations, it's still too early to be at ease," Moon said and asked the public to be patient a little bit more, a day after the government's announcement of a decision to extend the social-distancing campaign through May 5.

The measure is aimed at terminating the coronavirus as early as possible, he said.

Moon also reaffirmed a bold push for "creative and special" steps to put the economy back on track.

He requested that the National Assembly work together in the efforts, pledging to listen to opinions from opposition parties.

His call came as the government is expected to roll out additional stimulus measures, including those meant to encourage local firms to maintain employment.

Lawmakers are already preparing to handle a supplementary budget bill to fund the government's plan for "emergency disaster relief payments" of up to 1 million won (US$820) for all South Korean households except the top 30 percent by income.

The ruling Democratic Party has argued that all of the families should benefit from the program.