SEOUL, April 21 (Yonhap) -- The South Korean religious community is set to resume public meetings and services that have been on hold for nearly two months due to the novel coronavirus, after social distancing guidelines were eased.

The government earlier said it will extend social distancing for two more weeks, but it has partially eased the rules, conditionally allowing churches, bars, gyms and cram schools to resume operations.

The decision came as South Korea's new daily confirmed COVID-19 cases have remained under 20 for the past few days. 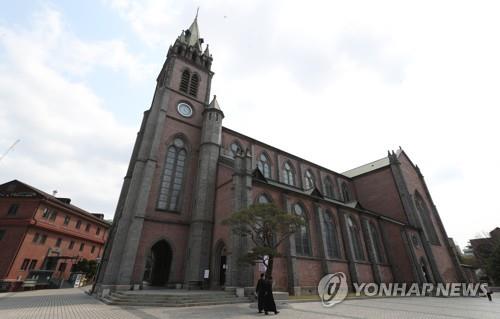 The Catholic Archdiocese of Seoul said Monday that Masses will take place in chapels with believers from Thursday.

It will be the first Catholic services in about two months since the Seoul Archdiocese -- the biggest in South Korea with 232 churches, including Myeongdong Cathedral, under its jurisdiction -- decided to suspend all meetings on Feb. 26.

But all participants have to report their names and wear face masks during the service, while other public gatherings and meetings will remain prohibited, according to the Seoul Archdiocese.

Out of 16 dioceses of the Catholic Church in South Korea, four dioceses, including those in Seoul and Jeju Island, have decided to resume on-site Masses as of Monday.

The Buddhist community will also resume its community services.

The Jogye Order of Korean Buddhism has announced plans to resume some mass events and prayer meetings at temples across the country.

But it will strictly comply with the social distancing rules, such as by asking its followers to have their temperatures checked at the entrance, report their names and keep seats at least 1 meter apart.

The Jogye Order has postponed all public events since Feb. 23, including the ritual to celebrate Buddha's birthday slated for April 30.

At the same time, a growing number of Protestant churches are expected to resume on-site services on Sunday.

According to a survey by the Christianity Media Forum of Korea, more than 60 percent of churches had already held services last Sunday, and the number will rise this week.

Yoido Full Gospel Church in Seoul, the biggest Protestant church in South Korea with 560,000 followers, said in a post on its homepage that it will have seven rounds of services at its main hall Sunday.

It is the first time that the church will hold on-site services since it converted to online ones starting Feb. 28.