"There is nothing unusual going on in North Korea. It's not true," a government official told Yonhap News Agency on condition of anonymity, referring to the CNN report that cited an unidentified "U.S. official with direct knowledge" of the matter.

Presidential spokesman Kang Min-seok also said that nothing unusual has been detected in the North.

"No unusual signs have been identified inside North Korea," Kang said. "There is nothing we can confirm with regard to Chairman Kim's alleged health problem." 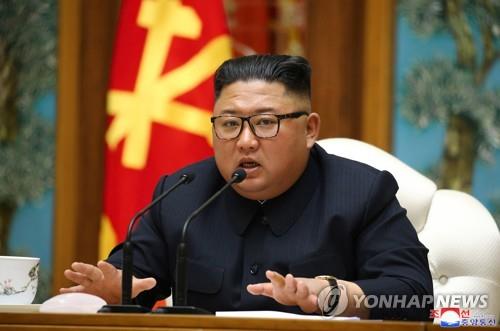 The CNN report came after the Daily NK, a South Korean internet news outlet specializing in North Korea news, reported that Kim has been receiving medical treatment at a villa in the resort county of Hyangsan near Mount Myohyang, north of Pyongyang, following a cardiovascular procedure.

A senior presidential official said that Kim is believed to be staying in a provincial region together with close aides. The official declined to get into details about the region, only saying that it is not the Mount Myohyang area.

"No unusual signs have been found that can back up the alleged health problem," the official said. "North Korea's Workers' Party, the military, the cabinet are not showing any special moves, such as an emergency alert."

The official also said that Kim appears to be acting "normally."

A source said that Kim is believed to be staying in the east coastal region of Wonsan, though he did not provide evidence to back up the claim or other details.

Kim was last seen on April 11 in state media reports presiding over a political bureau meeting of the ruling Workers' Party on Saturday, calling for "strict national countermeasures to thoroughly check the infiltration of the virus."

He, however, did not attend a major session of the country's rubber-stamp parliament the following day, nor did state media report on his attendance in the country's latest weapons tests last Tuesday, a day before the late founder's birthday, an unusual absence given that he had mostly supervised such firings in recent months.

The parliamentary meeting, in particular, was held two days later than originally scheduled, but the North's media did not provide the reason for the delay, sparking rumors about what was behind the rare unannounced postponement. Some raised the possibility it might have something to do with the coronavirus pandemic, including Kim's possible infection with the virus.

Despite the government's relatively quick response to dispel speculation about Kim's health conditions, some raised the possibility about something unusual happening inside the reclusive state.

Rep. Yoon Sang-hyun, who chairs the National Assembly's foreign affairs committee, told reporters that Kim appears to have undergone a heart-related surgery, citing multiple unspecified sources. But he was not sure about Kim's current health conditions.

"Some informed sources say that (Kim) had an ankle surgery; some claim that he is under quarantine at Mount Myohyang (near Hyangsan) due to COVID-19. There also are those who say that Kim underwent a cardiovascular procedure but that he is not in as serious of a condition (as reported)," he said.

A diplomatic source said the media reports about Kim's health appear to be nothing more than speculation.

"There have been such rumors since last week, especially in Japan. But these were nothing more than unconfirmed rumors," the source said.

From early September 2014, he disappeared from the public eye for about 40 days and returned limping. Seoul's intelligence agency later said that he underwent surgery to have a cyst removed from his ankle.

On Monday, the North's official Korean Central News Agency reported that Kim sent a congratulatory message to Cuban President Miguel Mario Diaz-Canel Bermudez for his 60th birthday, indicating that he is carrying out state affairs as normal.

Kim took over as leader of the communist state after his father Kim Jong-il died of a heart attack in late 2011.

Later in the day, the official Korean Central News Agency reported that Kim sent special birthday meals to Ri Sin Ja, a recipient of the Order of Kim Il Sung, and Ri Si Hup, a researcher at Kim Chaek University of Technology who is a winner of Kim Jong Il Prize, on his 80th birthday.

But the North's state media didn't say when the spreads were delivered or release related photos.