Paris-based Reporters Without Borders (RSF) announced its annual World Press Freedom Index, which evaluates the situation for journalists in 180 countries and territories.

South Korea fell by one place from last year's 41st. Though its actual scores have improved, its ranking came down because of Italy's advancement from 43rd to 41st.

South Korea retained its leading position among Asian countries including Taiwan at 43rd, Japan at 66th, Hong Kong at 80th and China at 177th.

North Korea dropped by one notch to 180th. It is back to the bottom after rising one step in 2019 because of the semblance of an opening to foreign media during the two summit talks with the United States in June 2018 and February 2019, the 2020 report said.

Norway topped the list for the fourth consecutive year, followed by Finland, Denmark, Sweden and the Netherlands. The United States moved up three notches to 45th.

The group said the coming decade will be decisive for the future of journalism, with the coronavirus pandemic highlighting and amplifying the many crises that threaten media freedom.

"The public health crisis provides authoritarian governments with an opportunity to implement the notorious 'shock doctrine' -- to take advantage of the fact that politics are on hold, the public is stunned and protests are out of the question, in order to impose measures that would be impossible in normal times," RSF Secretary-General Christophe Deloire said in the report.

The report accused China, unchanged at 177th, and Iran, down three to 173rd, of censoring their major outbreaks extensively. It criticized Iraq, down six to 162nd, for striping Reuters of its license for three months after the news agency's report questioned official coronavirus figures. 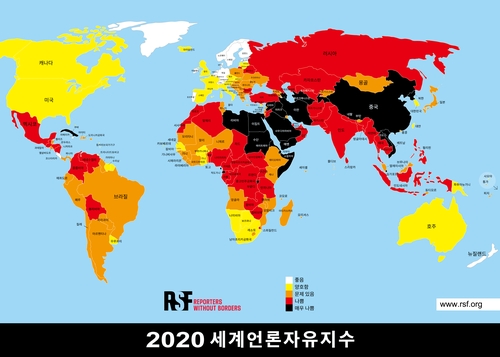