SEOUL, April 21 (Yonhap) -- The South Korean government said Tuesday it will inject 17 billion won (US$13.8 million) into the film industry as part of emergency plans to rescue the sector battered by the novel coronavirus.

It will also give a 90 percent cut in charges for the film development fund imposed on local movie theaters this year, according to the Ministry of Culture, Tourism and Sports.

In follow-up steps of the government's comprehensive measures earlier this month, the ministry said 4.2 billion won will fund films that have had their premieres or productions pushed back because of the virus. 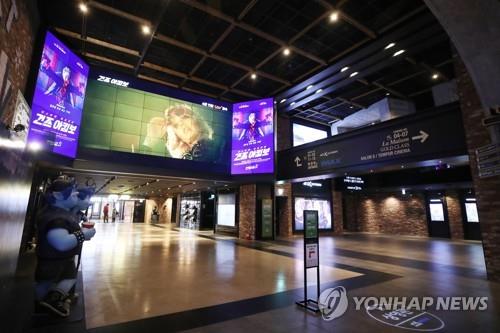 The culture ministry said that cinemas will be charged only 0.3 percent for the film development fund by the end of this year, down from the current 3 percent.

Under the current laws, all local movie theaters should contribute 3 percent of ticket sales every month to the fund. The total amount of annual imposition is about 54 billion won.

"We hope the plans will be helpful for the entire film industry, including theaters, film distributors, producers and their employees," the culture ministry said.

The number of moviegoers in South Korea dropped to a record low of 1.83 million last month, the lowest monthly tally since the local box-office data was first compiled in 2004. A year ago, 14.67 million tickets were sold across the nation.

The total revenue nose-dived 88 percent on-year to 15.2 billion won in March, while leading multiplex chains like CGV have closed some of their cinemas in the country as belt-tightening efforts.

Last month, groups of producers, directors, distributors and theaters released a joint statement to call on the government to give financial support to the virus-hit film industry.

They welcomed the government's latest plans but asked it to carry out the spending programs as soon as possible.