The index opened lower, tracking overnight losses on Wall Street and plummeting oil prices. The KOSPI further extended losses to nearly 3 percent during a session after CNN reported that North Korean leader Kim Jong-un is in grave danger after a surgery, citing an unidentified U.S. official with direct knowledge. 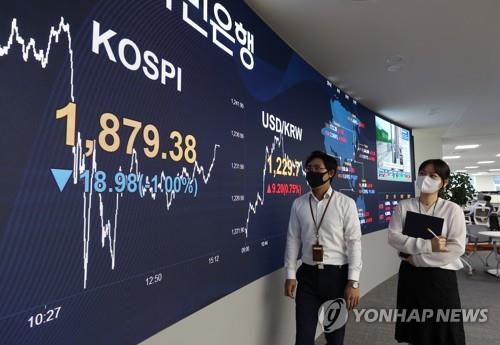 The KOSPI soon trimmed losses after the Seoul government said it has seen no unusual signs with regard to Kim's health.

The local currency closed at 1,229.7 won against the U.S. dollar, down 9.2 won from the previous session's close.

Bond prices, which move inversely to yields, ended lower. The yield on three-year Treasurys added 2.2 basis points to 1.035 percent, and the return on the benchmark five-year government bond was up 1.3 basis points to 1.230 percent.