SEOUL, April 21 (Yonhap) -- Almost all university students in South Korea are demanding a refund of their tuition fees for the spring semester, a poll said Tuesday, citing poor quality of online lectures currently underway due to the coronavirus.

The survey of 21,784 students at 203 universities and colleges found 99.2 percent of them agreeing to the full or partial refund of their spring semester tuition, according to the National University Student Council Network, a network of university student councils across the country. 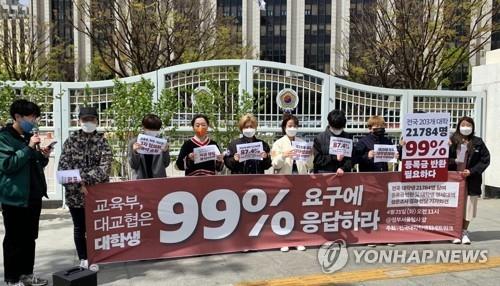 The main reason for the demand was the poor quality of online classes and school facilities being unavailable, the poll said.

The network said 55 percent of the respondents called for a refund of at least half of their tuition fees, while 28.4 percent proposed a 20 to 30 percent refund.

Only 9.5 percent of the surveyed demanded a full refund, it noted, adding most respondents complained about unnecessary expenditures on rent and dorm fees, as well as difficulties in finding jobs.

The network unveiled the results of the poll conducted last week during a news conference while calling for measures to address disastrous situations faced by local university students.

"University student councils have successively issued statements on the ongoing disaster over the past two weeks, but the Ministry of Education and the Korean Council for University Education have failed to respond," the group said in the conference.

"Tuition fees should be refunded as wished for by 99 percent of students. Economic measures should also be prepared for students now put in blind spots due to monthly rent expenditures and difficulties in job hunting," it argued.

Most universities began the new semester with online lectures in March to prevent the spread of COVID-19. But students have filed petitions and held rallies, saying their right to learn has been violated and demanding schools refund the tuition.

Government officials and universities have reportedly begun to discuss how to meet students' growing calls for refunds.