SEOUL, April 21 (Yonhap) -- South Korea's two state lenders said Tuesday they will inject 1.7 trillion won (US$1.4 billion) into Asiana Airlines Inc. to help it stay afloat amid the growing impact of coronavirus on the airline sector.

The Korea Development Bank (KDB) and the Export-Import Bank of Korea (Exim Bank) have decided to extend new loans to Asiana Airlines to dispel growing concerns that the creditor banks' plan to sell Asiana may fall through due to the COVID-19 impact, a KDB official told Yonhap News Agency.

But the official didn't provide a breakdown of the loans. 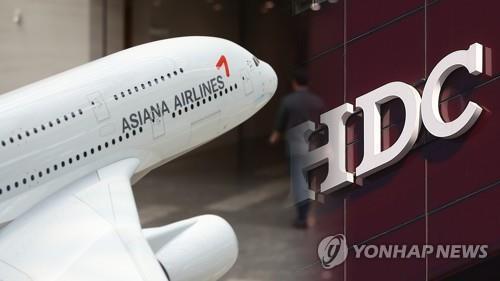 Last year, the KDB and Exim Bank extended a total of 1.6 trillion won to the country's second-biggest airline after Korean Air Lines Co.

Korean Air said Tuesday it has yet to receive financial support from the government.

The government is expected to come up with measures this week to provide financial support to airlines and other core industries hit hard by the COVID-19 outbreak.

In December, the consortium set up between HDC Hyundai Development Co. and Mirae Asset Daewoo signed a deal to acquire a 30.77-percent stake in Asiana from Kumho Industrial Co., a construction unit of Kumho Asiana Group, as well as new shares to be issued and the airline's six affiliates, for 2.5 trillion won (US$2.2 billion).

Asiana and other South Korean carriers have suspended most of their flights on international routes as an increasing number of countries have enacted entry restrictions amid virus fears.

Shares in Asiana have fallen 25 percent this year through Tuesday, underperforming the broader KOSPI's 14 percent loss.

HDC has reiterated its plan to complete the overall process to acquire Asiana by the end of April, dismissing speculation that it may have difficulties in taking over the company due to fallout from the coronavirus.

Earlier this year, HDC reported its planned takeover of Asiana to six countries -- the United States, China, Russia, Kazakhstan, Uzbekistan, and Turkey -- to which the airline offers services, for their review of the integration of the two companies.

China has recently approved the acquisition, but five other countries have yet to give the greenlight to the integration.

Also on Tuesday, Exim Bank converted $500 million worth of dollar-denominated debt sold by Doosan Heavy Industries & Construction Co. into the same amount of loans, as the plant builder cannot repay the debt set to mature on April 27, an official at the lender said.

The state bank delivered a payment guarantee when Doosan Heavy issued dollar-denominated corporate bonds in April 2015, but the plant builder has faced a liquidity crisis due to years of declining orders amid an economic slowdown.