The producer price index for all commodities and services came to 102.89 last month, compared with 103.74 in February, according to preliminary data from the Bank of Korea (BOK).

From the same month a year earlier, the figure marked a 0.5 percent decrease. Producer prices serve as a key barometer of future inflation.

South Korea's consumer prices have been on a steady rise, adding 1 percent from a year earlier in March and 1.1 percent the month before. 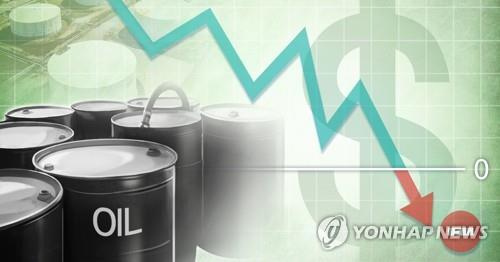 The March decline in producer prices was attributed mainly to a crash in international crude prices.

Prices of the benchmark Dubai crude averaged US$33.71 per barrel in March, compared with $54.23 the previous month.

The producer price index of industrial goods slipped 1.4 percent in March, led by a 19.9 percent plunge in factory prices of petroleum products.

In contrast, the producer price index of agricultural goods and fishery products gained 1.2 percent from a month earlier due to increased food purchases because of the coronavirus outbreak.

The price index of utilities and the service industry shed 0.3 percent from the previous month in March as people avoided going out due to the disease, according to the data.
(END)