SEOUL, April 22 (Yonhap) -- "Universe," a major dot painting by late South Korean abstract master Kim Whan-ki, will go on exhibition in his home country next month after it was sold for the highest price tag of any Korean painting in an auction last year.

According to Gallery Hyundai, the diptych, officially titled "Universe 05-IV-71 #200," will be part of the collection for the gallery's special commemoration exhibition "Hyundai 50." The show is scheduled to open on May 12 and run till May 31.

It is the first home exhibition of the biggest painting by Kim since the piece was sold at a Christie's auction in Hong Kong in November.

"Universe" was sold for HK$88 million, or 13.2 billion won (US$10.7 million), at the auction, the first time that a Korean painting has fetched more than 10 billion won at an auction.

Measuring more than 2.5 meters in height and width, "Universe," a painting of blue dots, is the biggest work by Kim in size and the only diptych in the artist's oeuvre.

Painted in 1971 in the late years of Kim's life, the work is acclaimed as the crown jewel of the painter's oeuvre.

The upcoming show is likely to be a rare moment for home exhibition of the master piece after it was sold to an unidentified non-Korean art collector at the Hong Kong auction.

In "Hyundai 50," organized to celebrate the 50th anniversary of its founding, Gallery Hyundai will put up for show a collection of major artworks by legendary Korean artists, including Park Soo-keun, Lee Jung-seob and Korean American media art pioneer Paik Nam-june.

The first leg of the exhibition, slated from May 12-31, will feature some 40 master artists, and the second leg will run till July 12. 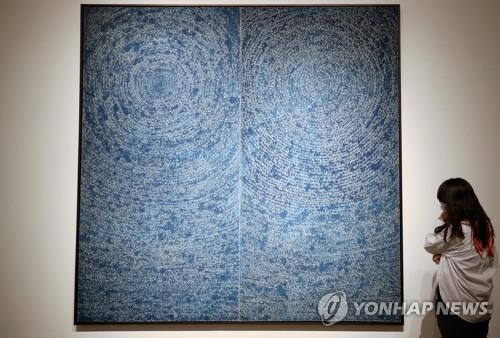