He was attending a ceremony to christen the 24,000-TEU vessel, the Algeciras, for use by the South Korean shipper HMM.

It ushers in the rebuilding of the country's shipping industry, Moon said during his speech at the shipyard of Daewoo Shipbuilding & Marine Engineering (DSME) on the southern island of Geoje.

"Our shipping industry suffered a big difficulty due to the 2017 collapse of Hanjin Shipping but we have eventually overcome it," Moon said. He was referring to what used to the nation's leading container carrier.

At that time, the government launched a five-year project to revive the industry.

The birth of the Algeciras, named after a southern Spanish port city, is a fruit of the efforts, he added.

"Today's naming ceremony is just a beginning," the president said, pointing out that it's the first of a dozen same-class container ships to be launched this year by South Korean shipbuilders. 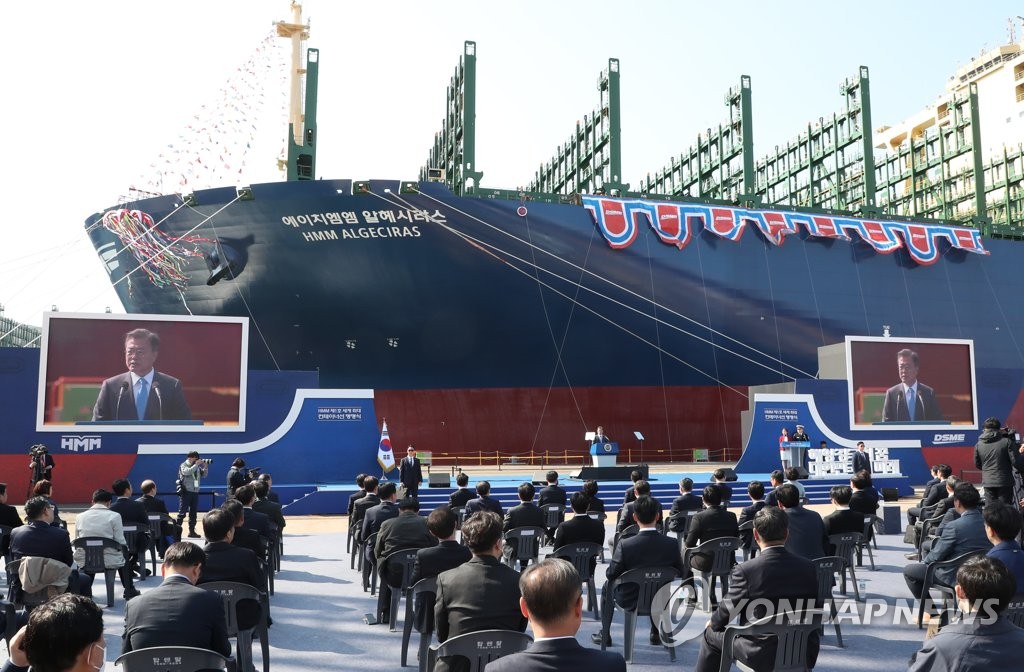 He emphasized the importance of the shipping industry for South Korea's economy and reaffirmed the government's firm support for it.

He said South Korea aims to reemerge as a top five shipping power in the globe.

Shipping is among the seven key industries to benefit from the government-sponsored 40 trillion-won (US$32 billion) emergency relief package designed to cushion the impact of the coronavirus pandemic. The others are aviation, shipbuilding, automobile, machinery, electric power and communication.

Earlier in the day, the Ministry of Oceans and Fisheries announced an additional financing measure, worth 1.25 trillion won, for the shipping business alone.

"The government will be with companies till the end so that the shipping industry can ride out the coming wave," he said. "We will certainly prevent the collapse of the global supply chain."

Moon also presented a three-point longer-term vision -- promoting a win-win business model for shippers and traders, adapting effectively to the fourth industrial revolution and nurturing the construction of environment-friendly ships.

The Algeciras, meanwhile, is scheduled to leave for Qingdao, China, on Friday.