SEOUL, April 23 (Yonhap) -- About 200 South Koreans, including a medical expert dispatched to help Uzbekistan with the coronavirus outbreak, will fly home from the Central Asian nation this weekend on a special flight arranged by Tashkent in a show of appreciation to the expert, officials said Thursday.

Choi Jae-wook, a preventive medicine professor at Korea University, has been in Uzbekistan since late last month, after accepting his government's request for him to help Uzbekistan cope with the coronavirus outbreak.

But Uzbekistan's nationwide lockdown over the virus outbreak left Choi stranded there, like many other foreign nationals. Tashkent also announced it will shut down all airports and suspend flight operations until early May.

The flight, scheduled to arrive Sunday, will also bring around 200 South Korean nationals home, as well as about 30 others, including Americans, Canadians and Japanese, to help them fly back to their countries.

Choi was originally planning to stay in Uzbekistan for the consultation for two weeks, but he extended his stay for two more weeks at the request of the Uzbekistan government, the officials added.

The same flight will head back loaded with Korean-made coronavirus test kits, enough to run 20,000 tests, according to Seoul officials. 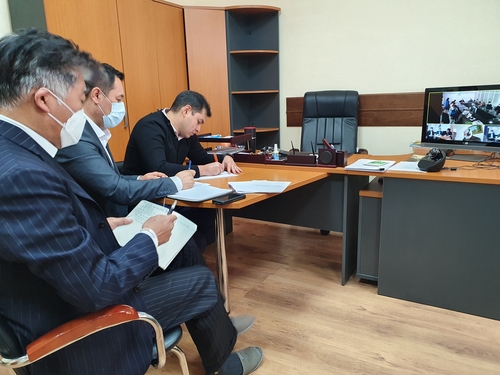