SEOUL, April 25 (Yonhap) -- The share of domestic factors in Seoul's ultrafine dust particles has increased over the past five years, while the ratio of China's contribution to the local particulate pollution has been stagnant, a report showed Saturday.

According to the report issued by the Seoul Metropolitan Government, homegrown pollutants were responsible for 26 percent of the capital's ultrafine particles smaller than 2.5 micrometers in diameter, or PM 2.5, as of 2019, marking a rise from 22 percent in 2016.

In contrast, the ratio of China's contribution to Seoul's PM 2.5 concentrations remained unchanged at 38 percent in the 2016-19 period, the report noted.

North Korea and other foreign regions were to blame for only 4 percent of the city's PM 2.5 pollution in 2019, down sharply from 17 percent in 2016.

The report said the PM 2.5 self-contribution ratio for other parts of South Korea, excluding Seoul, jumped from 23 percent to 32 percent. 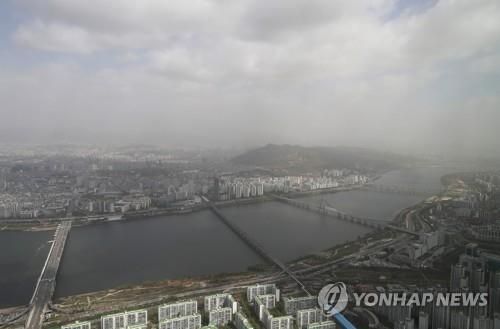 On a national scale, the self-contribution ratio rose from 45 percent to 58 percent in the same period, it said.

The report attributed the rise in homegrown air pollutants to a reduction of wind speed and increased chemical emissions.

The average wind speed in Seoul has decreased from 2.4 meters per second to 1.8 meters, while an environment favorable for the production of secondary ammonium nitrate has been created by the increased emissions of nitrogen oxide and ammonia across the nation, it explained. The report also noted that air pollutant emissions decreased in China to a greater extent than domestically.

However, the PM 2.5 contribution ratios fluctuated depending on the season. In winter, for instance, South Korea's PM 2.5 self-contribution ratio dropped to 49 percent, whereas China's ratio rose to 47 percent.