SEOUL, April 24 (Yonhap) -- A vice chairman and several other executives of a Kosdaq-listed company funded by the scandal-ridden Lime Asset Management Co. were given prison sentences for embezzlement Friday.

The Seoul Southern District Court handed down an imprisonment of eight years to a vice chairman of Leed Corp., identified only as Park, after finding him guilty of embezzling 83.4 billion won (US$67.5 million) of company funds.

CEO of the display equipment maker, identified only as Koo, a company sales manager surnamed Kang and the chief of a Leed Corp. subsidiary, identified only as Kim, were sentenced to four and three years in prison, respectively, for colluding with Park in the alleged embezzlement.

The court also sentenced a company vice president and a former company CEO both to three years in prison, suspended for four years, after convicting them of taking part in the suspected crime. 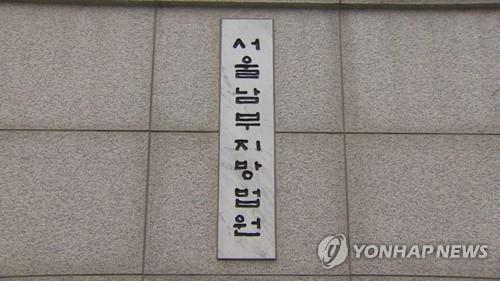 Park and his accomplices were indicted last October for siphoning company funds through paper companies in the name of needing funds to invest in other companies and spending them freely.

The accused insisted that the company money in question was moved in accordance with normal management judgments, but the court did not accept their claim.

Leed, based in Seongnam, just south of Seoul, was established in 2000 and listed on the tech-heavy Kosdaq market in 2015. Trading of its shares has now been suspended.

The case drew media attention as Lime Asset is one of the investors in Leed.

Lime Asset is under a prosecution probe over its alleged cover-up of massive investment losses and other irregularities. Its botched investment caused investors to incur heavy losses as it halted withdrawals of funds worth some 1.6 trillion won. Two key suspects implicated in the Lime Asset scandal were detained by police earlier this week.

The Seoul court noted in its ruing that Lee Jong-pil, former vice president of Lime Asset, had received a luxury bag and a watch in return for arranging investment funds in Leed.

Leed's chairman, identified only as Kim, has been put on the wanted list on suspicion of pocketing several billions of won in the process of accepting Lime Asset's investments.