SEOUL, April 26 (Yonhap) -- A total of 192 South Koreans arrived home from Uzbekistan on a special flight Sunday after having been grounded there due to the coronavirus, embassy officials said.

The plane operated by Uzbekistan Airways left Tashkent earlier in the day carrying the South Koreans as well as 55 foreigners from such countries as the United States, Canada, and Japan, and it landed at Incheon International Airport, west of Seoul, at around 3:45 p.m., according to the Korean Embassy in the Central Asian country.

The international passengers are scheduled to return to their respective nations via South Korea, the embassy added.

The South Koreans from Uzbekistan will undergo tests for the COVID-19 virus and be quarantined for 14 days if they test negative for the virus.

Uzbekistan has banned international flights since March to stem the spread of the coronavirus, but the authorities approved the special flight mainly to allow Choi Jae-wook, a South Korean medical college professor, to return home, according to the embassy officials.

Choi had stayed in Uzbekistan from late March for about a month to provide its government with consultations on virus-related measures.

There are plans for the plane to bring home 20,000 Korean-made coronavirus test kits, they added. 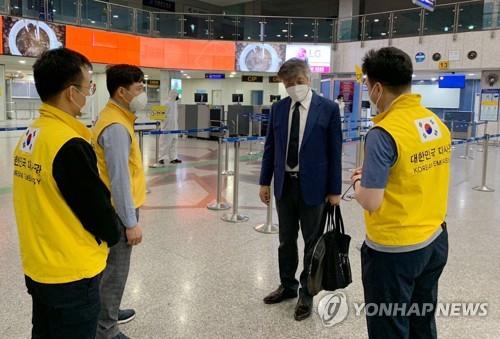