SEOUL, April 27 (Yonhap) -- South Korean smaller firms' business sentiment hit a new all-time low for May due to the impact of the coronavirus outbreak, a poll showed Monday.

The survey of 3,150 small and medium enterprises (SMEs) showed that the small business health index (SBHI) came to 60 for the coming month, down 0.6 point from April.

From a year earlier, the index was down a whopping 27.6 points. It also marked the lowest tally since April 2014, when data tracking began.

A reading below 100 indicates pessimists outnumber optimists. The survey was taken by the Korea Federation of SMEs.

The federation attributed the tumble in SMEs' business confidence to slumping domestic demand in South Korea and a slowdown in exports in the wake of the coronavirus pandemic.

The SBHI has declined for five months running this year because of growing uncertainties both at home and abroad, it added. 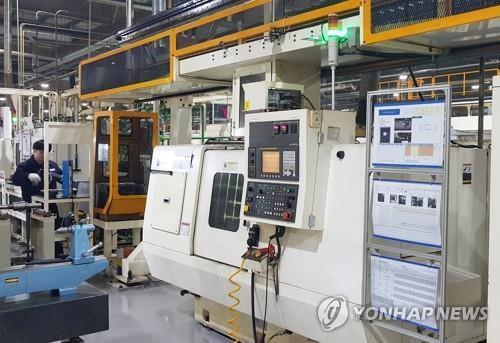 The SBHI for the manufacturing sector amounted to 64.8 for May, the lowest level since February 2009, shortly after the global financial crisis.

The indexes for exports, domestic demand, operating profit, financial conditions and employment levels all turned for the worse for the coming month.

The surveyed companies cited flaccid domestic demand (77.1 percent) and rising labor costs (38.1 percent) as the biggest hurdles to their management.

Large South Korean firms' confidence also remains sluggish due to the coronavirus outbreak. In a separate survey released earlier in the day, the Korea Economic Research Institute (KERI) said its business survey index (BSI) of the country's top 600 companies by sales came to 61.8 for May, a tad higher than 59.3 in April but well below the benchmark 100.

In particular, the subindex for their exports reached a new record low of 65 due to tumbling demand for South Korean goods in its main overseas markets like the United States, Japan, and Europe, KERI said.
(END)